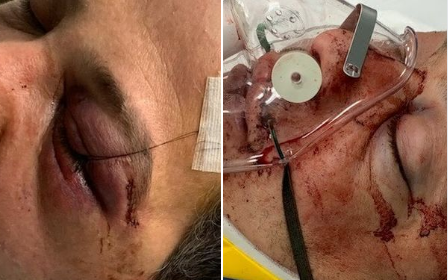 (NEW YORK, NY, 11/10/2020) – The New York chapter of the Council on American-Islamic Relations (CAIR-NY), the nation’s largest Muslim civil rights and advocacy organization, today called on the NYPD to initiate a hate crime probe after a Muslim father was allegedly assaulted in an apparent anti-Muslim attack.

The incident reportedly occurred on November 6 in Rego Park, Queens.

The victims of the alleged hate crime, 38-year-old Egyptian-American Khaled Aly and his wife, Neamat Taha, and their two children, age 6 and 8, were reportedly returning home on Friday night at approximately 11 p.m.

Aly was immediately rushed to the hospital where he was hospitalized and underwent surgery for his ‎injuries.  Aly was released from the hospital Monday evening.  ‎

Photos of Aly After the Assault:

The alleged assailants have been identified as neighbors who live in the apartment complex.  Despite having the identities of the assailants and witnesses to the violent assault, the NYPD has failed to make any arrest.

On Saturday at approximately 4:30 a.m. as Taha returned to the apartment complex from the hospital, she was confronted by the male assailant who bragged about assaulting Aly and threatened Taha and her family stating “I’m going to burn you and burn your family.” Taha was accompanied by male friends.  Taha and her family have not returned to their apartment out of fear for their safety.

The family reports that the assailants have been harassing them over an extended period of time.  The family previously filed a police report over the harassment.  The family also reported the harassment and threats to the apartment complex’s management.