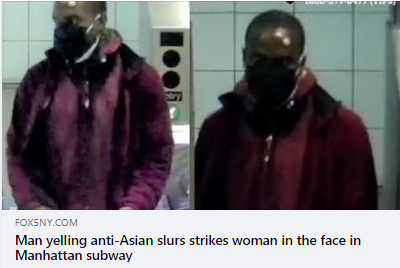 (NEW YORK, NY, 3/30/2021) – The New York chapter of the Council on American-Islamic Relations (CAIR-NY), the nation’s largest Muslim civil rights and advocacy organization, today condemned the latest in a series of hate crimes targeting the Asian-American and Pacific Islander communities, this time in Manhattan and Brooklyn.

On Monday, March 29, a 65-year-old woman was assaulted and verbally abused while on her way to church. In video of the attack, the elderly Asian woman is kicked, punched, and viciously stomped on as security guards from a nearby building watch without intervening or providing aid after the attack. The attacker allegedly made anti-Asian statements during the assault.

Video of the Attack: WARNING GRAPHIC AND VIOLENT:

SEE ALSO: The NYC security guards who watched as an elderly Asian woman was attacked in the street have been suspended

Also, on Monday, a video appeared on social media showing an Asian American male being relentlessly punched and choked on the Subway in Bushwick, Brooklyn. The victim was left on the ground unconscious while the assailant left the train.  Both the victim and assailant are unidentified at this time.

Video of the attack: WARNING GRAPHIC AND VIOLENT

Over the weekend, on March 27, a 37-year-old Asian American woman was struck in the face without provocation by a male assailant who allegedly yelled anti-Asian slurs. The victim was walking thought the East 51st Street Station on Lexington Avenue.  The suspect is at-large.

All three incidents are being investigated by the NYPD Hate Crimes Task Force.  Any tips or information about these assaults may be reported at 1-800-577-TIPS.

“CAIR-NY condemns these vicious hate crimes and expresses solidarity with the victims and the Asian-American and Pacific Islander communities. We are heartbroken at the continual violence targeting the AAPI communities in New York City and around the country.

“Asian-Americans belong here and deserve to live without being targeted for who they are. The rise in anti-Asian hate must stop and communities must stand together to provide support to the AAPI community. We also need our elected leaders to do more and provide community-based organizations with the resources they need to assist the victims and provide safety for their communities.

“CAIR-NY is also concerned at the lack of empathy and intervention shown by bystanders during these incidents. We encourage members of the public to learn bystander intervention and to reach out to community-based organizations to get trainings. Together, we can put an end to this hate. We must #StopAisanHate!”

CAIR-NY is committed to supporting and advocating for the Asian American and Pacific Islander communities and has participated in several vigils and protests.

CAIR-NY is encouraging Muslims throughout New York City to show solidarity with their Asian American neighborhoods.