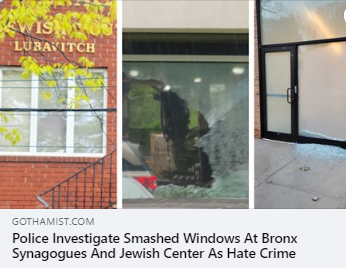 (NEW YORK, N.Y., 04/26/2021) – The New York chapter of the Council on American-Islamic Relations (CAIR-NY), the nation’s largest Muslim civil rights and advocacy organization, today condemned the targeting of Synagogues and a Jewish Center in the Bronx over the weekend.

According to reports, the NYPD’s Hate Crime Task Force is investigating six incidents in which a suspect threw rocks, damaging windows and doors, at four different Jewish institutions in the Riverdale neighborhood in the Bronx.

It is unclear if the same suspect is responsible for all six incidents.

“CAIR-NY condemns the targeting of Jewish religious institutions and stands in solidarity with our Jewish neighbors. Vandalizing a place of worship is abhorrent. No one should be targeted because of their faith.”