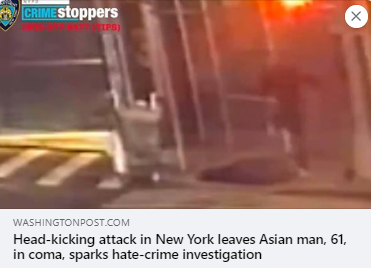 On April 23, a 61-year-old Asian man, Yao Pan Ma, was pushing a cart and collecting bottles in East Harlem when he was struck from behind and attacked. Ma was motionless on the sidewalk as his attacker repeatedly kicked and stomped on his head. Ma, a Chinese immigrant, has not awakened since and remains in a medically induced coma.

“We are sickened to learn about another vicious attack on the Asian-American community in our city. We ask all New Yorkers to reject hate and to help create a safe and welcoming city for Asian-Americans and members of all other minority communities. We send our thoughts and prayers to Mr. Ma, his family, and community. We pray that Yao Pan Ma wakes up and recovers and that his attacker is captured and prosecuted to the full extent of the law.”