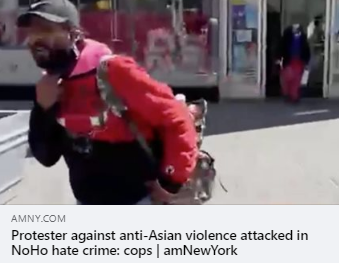 (NEW YORK, NY, 3/22/2021) – The New York chapter of the Council on American-Islamic Relations (CAIR-NY), the nation’s largest Muslim civil rights and advocacy organization, today condemned the latest in a series of hate crimes targeting the Asian-American and Pacific Islander communities.

On March 21, a 68-year-old Sri Lankan man was riding the subway in Tribeca when he was reportedly verbally assaulted by a man later identified as Marc Mathieu. The suspect allegedly referred to the victim as a “motherf—ing Asian” before throwing a newspaper at him and punching him in the face. Witness George Okrepkie helped the victim until medics and the NYPD took over. Mathieu has since been arrested, while the victim is recovering in New York-Presbyterian Lower Manhattan where he is currently in critical but stable position.

That same day, a 37-year-old woman was allegedly attacked on her way to a protest against anti-Asian violence. The unidentified assailant asked to see the poster she was carrying, took it and stomped on it, and then punched her in the face twice before escaping on the Astor Place subway. Medics brought the victim to the Lenox Hill Healthplex to care for her injuries sustained in the attack and the case has been transferred over to the NYPD Hate Crimes Task Force.

“The exponential rise in violence, hate and harassment directed at Asian-Americans is disgusting, devastating and must stop. CAIR-NY stands in solidarity with AAPI communities targeted by hate.

“Organizations like the Asian American Federation have reported thousands of anti-Asian bias incidents and elected officials have failed to appropriately respond to their calls for assistance. AAPI communities need their community-based organizations to be funded so they can have access to resources to survive covid and cope with this dangerous anti-Asian hate that is sweeping our nation.

“The assaults of this weekend are reprehensible and are a continuation of hate incidents against Asian-American in this City. Our thoughts and prayers are with the victims, for their speedy recovery and for the assailants to be apprehended. The NYPD must do the right thing and label these incidents for what they are: hate crimes.”

CAIR-NY is committed to supporting and advocating for the Asian American and Pacific Islander communities and has participated in several vigils and protests this weekend.

On Friday evening, several members of CAIR-NY attended a vigil in Union Square that was dedicated to remembering those lost in the mass shooting at the Gold Spa and Youngs Asian Massage parlor in Acworth, GA. Legal Director Ahmed Mohamed and Operations Coordinator Libby Salzman-Fiske also participated as marshals for the event.

Board member Imam Ibad Wali presented a prayer for the Saturday virtual vigil, Unity and Solidarity with the AAPI Community, organized by the New York City Asian-American Democratic Club and the Muslim Community Network.

Members from CAIR-NY were also participants in Sunday’s Black and Asian Solidarity 5K Run and Walk in Union Square and at the AAPI Rally Against Hate in Columbus Park.

CAIR-NY is encouraging Muslims throughout New York City to show solidarity with their Asian American neighborhoods.