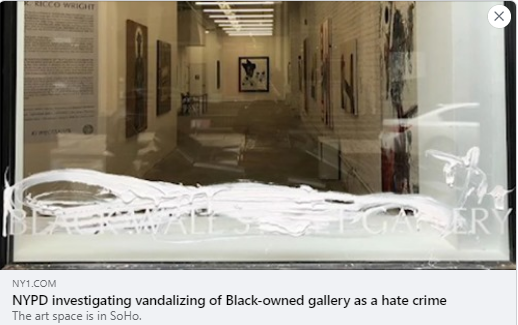 On May 31, Ricco Wright discovered that white paint had been smeared over the front window of his gallery, specifically over the vinyl lettering that read “Black Wall Street Gallery.” For two consecutive days following the initial attack, Wright discovered more instances of vandalism. No other businesses in the area were vandalized, indicating that this was a targeted attack.

The gallery’s current exhibit, 21 Piece Salute, is intended to honor those that lost their lives during the 1921 Tulsa Race Massacre, during which white mobs attacked Black residents and destroyed Black businesses. The attack occurred on the 100th anniversary of this event.

On June 3, the NYPD released footage of an unidentified suspect.

“CAIR-NY strongly condemns this targeted attack on the Black community. We are horrified that this bias-motivated vandalism of the Black Wall Street Gallery occurred on the anniversary of such a brutal and horrific moment in history. We urge the NYPD’s Hate Crimes Task Force to swiftly investigate this incident and bring the perpetrator to justice.

“This is not a stand-alone incident. It is a continuation of a larger, systemic pattern of violent and targeted attacks on the Black community. CAIR-NY is committed to fighting for justice for all, and we stand in solidarity with the Black community and all those hurt by this incident.”