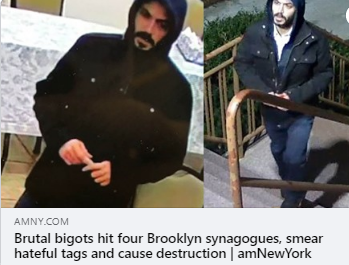 According to the NYPD, a male suspect vandalized four Brooklyn synagogues with graffiti hate speech on or about December 26.  Phrases scribbled on the building included “pedophiles,” “thieves pedophiles,” and “anti-acculturation.”

“We condemn these displays of hate. This hatred has no place in New York City and especially not at a place of worship. New Yorkers of all backgrounds must stand together in the face of growing hatred and division. We commend authorities for investigating these acts as a hate crime.”

CAIR and the American Muslim community have in the past expressed solidarity with Jewish, Christian, Native American, African-American and Sikh communities nationwide following acts of hate, threats, violence, vandalism, arson or bombings.