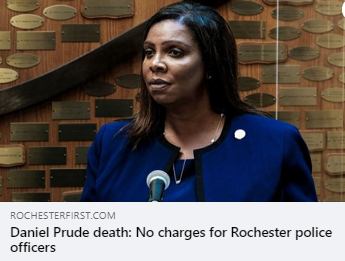 Prude, a 41-year-old Black man from Chicago, was murdered after an encounter with Rochester police back in March, but the circumstances relating to the incident did not come to light until September.

The autopsy report from the Monroe County Medical Examiner’s Office ruled the death of Mr. Prude a homicide, including “complications of asphyxia in the setting of physical restraint.”

Rochester Police had covered Mr. Prude’s face with a “spit sock.” The matter was investigated by the New York State Attorney General’s Office, who presented evidence to a grand jury.  According to reports, the Rochester police officers who were involved in the death of Daniel Prude will not face charges after the grand jury made the decision to not indict.

“CAIR-NY decries the grand jury’s failure to indict the officers responsible for Mr. Prude’s homicide. This failure is another miscarriage of justice and another example of how the criminal justice system fails Black and brown people. We continue to send our prayers and thoughts to Mr. Prude’s family, friends, and community as they reel from his loss and the injustice of the system.

“Clearly, Daniel Prude was suffering from a mental health emergency and was not able to respond to police instructions. We must expand the use of mental health services and civil services to respond to calls instead of relying on police — who are ill-equipped — to ensure the safety of those involved.

“Daniel Prude’s death is not an isolated incident. As we have seen in the cases of Mohamed Bah, Eric Garner, Tamir Rice, Breonna Taylor, and George Floyd, police too often utilize violent and sometimes fatal techniques, resulting in senseless loss of life. We must demand that police departments reallocate resources to social service providers and should not be first responders to mental health situations.”

CAIR-NY earlier released a statement sending condolences to the Prude family and calling for an investigation.