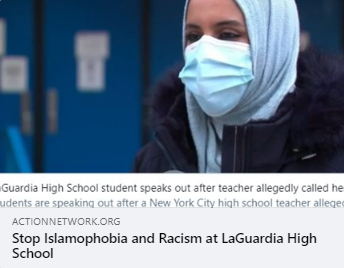 Groups Call on NYCDOE to Investigate Fiorello H. LaGuardia High School of the Performing Arts for Condoning Islamophobia and Racism

The groups also demanded an investigation of LaGuardia High School (LHS) for condoning Islamophobia and racism, an apology from LHS and NYCDOE for a highly offensive dance concert featuring the Islamic call to prayer, and for the implementation of a series of bias and anti-bullying trainings and educational materials for staff and students.

“The Department of Education (NYC DOE) must have a zero-tolerance policy for administrative bullying targeting students, especially in cases on religious discrimination and racism. Repeatedly, CAIR-NY has observed that the NYC DOE does not take Islamophobic incidents seriously. A teacher that calls a student a ‘terrorist’ must immediately be removed from the classroom. In this matter, the NYC DOE forced a student to remain in a classroom with her abuser, further traumatizing Duha and negatively impacting her schoolwork. It is a shame that the NYC DOE would protect the teacher instead of Duha and her classmates in this appalling situation. A school should be a place of refuge, learning and growth, not a place of torment.

“During our investigation, CAIR-NY discovered that LaGuardia High School condones Islamophobia and racism, and lacks religious sensitivity when it comes to Islam. The NYC DOE must investigate the school, apologize for the highly offensive dance routine mocking Islam, and implement steps to ensure similar conduct does not take place again. Students, parents, and community members expect schools to respect their religious backgrounds and beliefs. The NYC DOE has a long way to go to show Muslims that they will be respected and treated with dignity.”

“Yet again we are seeing institutional Islamophobia victimizing the community’s most vulnerable population, students and adolescents. Islamophobia has no place anywhere, and especially in public spaces. Callous attitudes towards systemic Islamophobia has no place in our public institutions. Every student and every faith group must be treated with respect and dignity. Majlis Ash-Shura: Islamic Leadership Council of New York, a representative for over 90 mosques and organizations calls for accountability in this matter. We demand that the NYC Department of Education address every incident of Islamophobia seriously and hold all their employees accountable for racism.”

“With a heavy heart, the American Pakistani Advocacy Group (APAG) strongly condemns the acts of islamophobia and racism that occurred at Fiorello H. LaGuardia High School.  APAG is an organization founded on the ideals of equality, rooted in notions instilled by the Constitution of the United States, that all are created equal. We cannot sit idle and allow vile discourse to be permissible. Educational institutions are sacred in that they provide key nourishment to growing minds. Allowing children to be exposed to inaccurate and dehumanizing rhetoric will only fuel the growing divide in this country. It will seek to permeate the minds of these growing children and thus perpetuate a cycle of disdain and hatred. As such, we call upon the Department of Education to take swift action in investigating this incident and allow justice to be brought to Duha Elkhouli and her family – as well as the countless other victims of social prejudice and discrimination.”

On December 11, 2019, while Duha Elkhouli, a 16-year-old female Muslim teen of Egyptian ancestry who wears hijab (Islamic headscarf), was in Physics class, her teacher reportedly called her a “terrorist.” Duha reported the incident to school administrators who failed to report the incident to NYCDOE and failed to investigate as required by NYCDOE regulations.

The next day, the physics teacher harassed Duha, removed her from her AP World class for a “private conversation” and gave her a bag of chocolate to induce her silence.  Later that day, the teacher explained to the physics class that he called Duha a terrorist because that is how the movies portray “brown people, Arabs, and Muslims.”

As counsel for Duha and her family, CAIR-NY filed complaints with NYCDOE on Jan. 6 and 8, 2020.  The complaints requested that the teacher be removed from the classroom pending an investigation.  NYCDOE did not contact Duha, her family, or CAIR-NY for months.

As a result of the incident, Duha’s schoolwork was negatively impacted and the incident has had a traumatic impact on her life.  Listen to Duha talk about the traumatic incident:  https://www.instagram.com/p/CIevJiClT25/.

Additional Allegations of Racism Against Same Teacher Can Be Found Here

In response to widespread racism among students and administrators at LaGuardia High School, students have come together to form the Young Idealist–a student led movement to combat racism in school and advocate for and support victims of racism.

At the 2019 school Graduation Dance Concert, students preformed an extremely offensive dance routine featuring the Islamic athaan (Muslim call to prayer). Almost immediately, the instructor was informed of the offensive, sacrilegious, and degrading nature of the dance. The athaan is used as the call to prayer and preparing a Muslim’s soul and body for a spiritual meeting with God five times a day. This dance production makes a mockery of the very essence of the purity of the athaan. A year and a half later, the video is still on the school’s official website.

The video is entitled “Inchallah” and can be found here:

Majlis Ash-Shura: The mission of the Islamic Leadership Council of New York is to provide a united platform for the New York Muslim community through advocacy, network building, and representing important issues for marginalized communities.

The American Pakistani Advocacy Group (APAG) is an organization based upon building bridges between communities and increasing the cultural awareness and representation of community through the promotion and sponsorship of local state and federal policies.