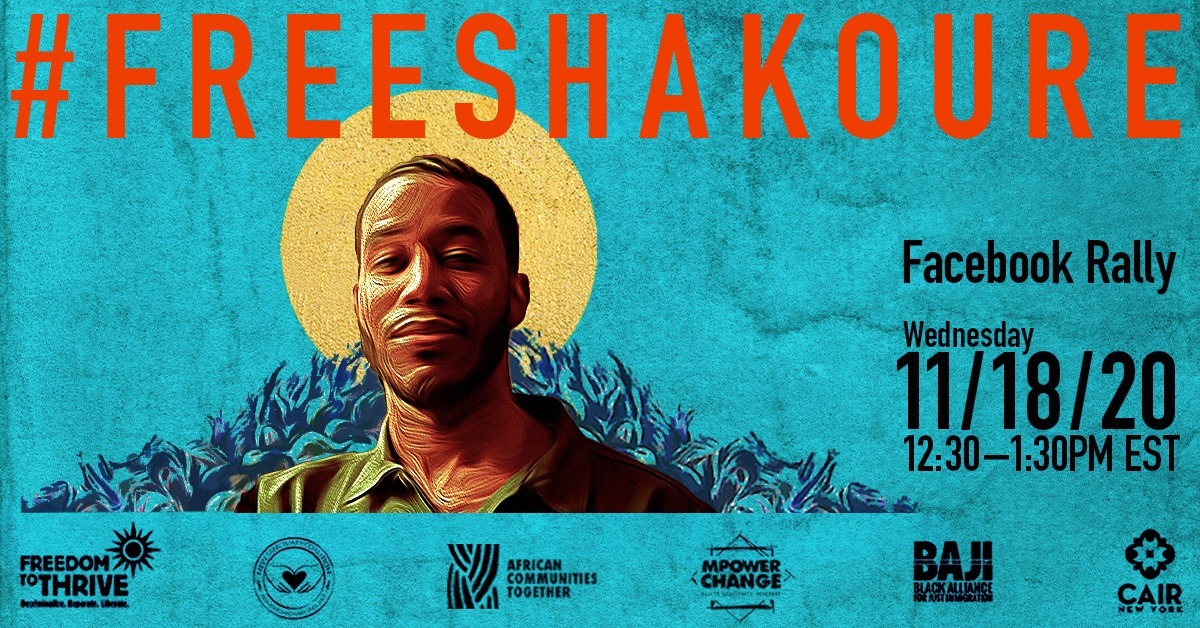 (NEW YORK, NY, 11/18/2020) – The New York chapter of the Council on American-Islamic Relations (CAIR-NY), the nation’s largest Muslim civil rights and advocacy organization, and a coalition of organizations will have an on-line rally and press conference 12:30 to 1:30 p.m. EST, Wednesday, November 18th to demand the release of Pascal Shakoure Charpentier—a U.S. citizen held in ICE detection since July 2020.

WHAT: On-Line Rally and Press Conference
WHEN: Wednesday, November 18, 12:30 p.m. EST
WHERE: LIVE ON FACEBOOK

From MPower Change, “Shakoure’s case illustrates the compounding effects of anti-Blackness, Islamophobia, and xenophobia in our carceral system.”

More than 2,500 people have signed a petition urging the Governor’s office to grant clemency which would erase the 30-year-old crime that triggered his arrest. Hundreds have called his office and have sent email messages to the Executive Clemency Board in support.

President Trump’s 2017 Executive Order called Enhancing Public Safety expanded the priority list of people subject to deportation to include anyone who has “committed acts that constitute a chargeable criminal offense.” Trump’s extremely broad Executive Order has meant that 74% of the people arrested by ICE’s Enforcement and Removal Operations had criminal convictions, a vast expansion from previous years.

According to a study done by NYU Law’s Immigrant Rights Clinic and BAJI Black Alliance for Just Immigration, “The government’s increasing focus on immigrants with criminal records disproportionately impacts Black immigrants, who are more likely to be identified through interactions with local law enforcement, because of rampant racial profiling.”

The words of Pascal Shakoure Charpentier:
“How quickly our systems can fail us. The law can undo so much that a family has built over decades, no matter how much a person can have accomplished, and crumble right before their eyes because there’s a box that wasn’t checked off somewhere in the paperwork or documents that’s supposed to represent your citizenship.”

“We want ICE to know that we are watching and we won’t allow them to detain Shakoure, (or anyone) in dangerous, punitive conditions in the Bergen County Jail when COVID-19 runs rampant in jails, prisons, and detention facilities across the country,” said attorney Julie Goldberg, representing Charpentier.

Shakoure should not be required to fight to reunite with his family from a cage. Please follow our FB Page, www.Facebook.com/FreePascalShakoureCharpentier for all updates.