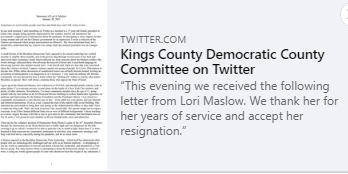 “We welcome District Leader Maslow’s resignation, but it should have happened weeks ago. The fact she was permitted to continue her position for this long is incredibly disappointing and speaks to the lack of respect for the communities Maslow insulted with her anti-Asian, anti-Palestinian, and Islamophobic violent rhetoric.  When good people come together to fight hate and bigotry, we win as a community and city. This is a victory for the impacted communities that refused to remain silent in the face of Maslow’s bigotry.”