CAIR-Ohio Testifies Before the Ohio Redistricting Commission on Proposed Maps 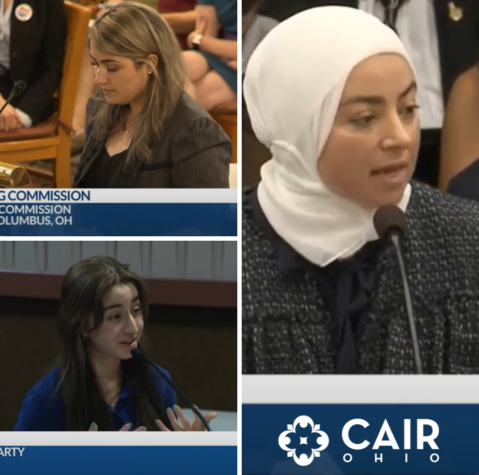 (COLUMBUS, OHIO 09/16/2021) – On Thursday, Sept. 9, Sunday, Sept. 12, and Tuesday, Sept. 14, the Ohio chapter of the Council on American-Islamic Relations (CAIR-Ohio) and Muslim community members testified before the Ohio Redistricting Commission on proposed maps in public hearings in Columbus and Dayton.

The Ohio Redistricting Commission hosted hearings in Dayon and Columbus to solicit public testimony on proposed maps submitted through the official redistricting process. On Thursday, September 9th, majority commission members proposed maps that seriously undermine constitutional requirements that direct the commission members to create maps that reflect the voting preferences of all Ohioans. The proposed maps would provide the GOP with 66% of Ohio legislature seats, despite the fact that they receive less than 55% of the statewide vote.
CAIR-Ohio Policy Director Tala Dahbour testified at the Ohio Statehouse regarding the importance of representational fairness.

“We need to ensure that Ohio voters are fairly represented in Ohio government seats for the next 10 years. These maps will shape our lives, laws, and policies for at least the next decade. We need fair maps to make sure all of us, especially immigrant communities like mine and other communities of color, are fairly and equitably represented, no exceptions.”
Amina Wase, a community activist, and CAIR-Ohio intern, who worked to mobilize her Dayton community to participate in the redistricting process, testified about her efforts in relation to the proposed GOP maps at the public hearing in Dayton on Sunday, September 12.

“I feel that my efforts have not been heard. Our maps have not been seen. We put hundreds of hours into mobilizing the community around this issue and I feel like my voice has been silence by political opposition and games.”

CAIR-Ohio Outreach Director Amina Barhumi, who is also a member of the Ohio Citizens’ Redistricting Commission (OCRC), pointed out the issues with the GOP proposed maps and testified in support of the OCRC unity maps, which were created through a long-term public process.

“The OCRC made a concerted effort to identify communities of interest, with similar policy concerns, and who would likely benefit from cohesive representation, through public testimony and community maps. Input from communities of interest particularly with underrepresented and minority groups, such as the Muslim community, were specifically sought after to ensure adequate representation.”

CAIR-Ohio is a proud member of the Ohio Citizens’ Redistricting Commission, Equal Districts Coalition, and the Equal Districts – Grassroots Mobilization Subcommittee. The organization has been engaged in the fight for fair maps this summer through community events, training citizens on mapping submitting community maps, distributing educational materials, testifying at hearings, and speaking at town halls.