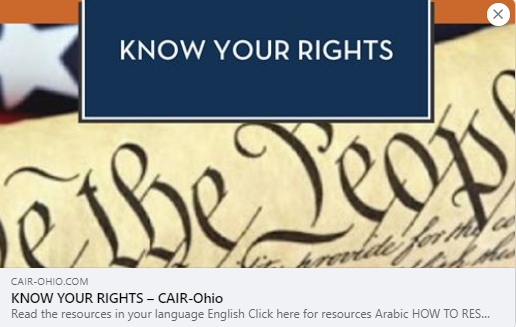 (CINCINNATI, OH – 6/7/2021) – On Tuesday, June 8, the Ohio chapter of the Council on American-Islamic Relations (CAIR-Ohio) will hold a press conference in Cincinnati to call on the Hamilton County Prosecutor’s Office to bring an ethnic intimidation charge following an incident in which a Mason Uber driver was allegedly physically attacked, racially abused, and had his car vandalized by a belligerent passenger.

The alleged victim will be available to answer questions at the press conference. The video of the incident will also be shared with the media.

CAIR-Ohio will also call on Uber to immediately reinstate the driver’s account and to provide just compensation for shutting down his account even though the driver provided video evidence of this attack to Uber.

“Abdelkadre has not only had to experience a hate crime while driving for Uber, but has also lost his livelihood as a result of this incident. We call on Uber to immediately reinstate his driver account and to also compensate him for inappropriately shutting down his account. As the victim, he should be supported rather than punished. We also call on the Hamilton County Prosecutor’s Office to prosecute this incident as a hate crime.”

Abdelkadre Khamis Ahmat, an immigrant from Chad and an Uber driver, was reportedly attempting to drop off a passenger on or around May 28, 2021. He arrived at the passenger’s neighborhood when the GPS stopped working. Ahmat asked the passenger to direct him to his home, and the passenger refused and called 911.

The passenger explained to the 911 operator that he would not leave until he was dropped off at his home. When he finished his 911 call, the passenger told the driver, “I hope to hell you get shot,” by the police and then called him the n-word. He then got out of the vehicle and began to vandalize the car. When Ahmat asked him to stop damaging his car, the passenger told Ahmat to remember that “you are black and I am white,” and then punched Ahmat in the shoulder.

The passenger who appeared to be intoxicated then fell to the ground and began bleeding from his nose. Meanwhile Ahmat tried to retreat to his vehicle but was chased by the passenger who then proceeded to smear his blood on Ahmat and the inside of his car. The passenger also told Ahmat that he would ensure that Ahmat never drives for Uber ever again in his life.

The driver recorded the entire incident on his phone camera and several people witnessed this assault.

Despite recording the entire incident on camera, and reaching out to Uber with the video, Ahmat’s Uber account was shut down by the company and remains deactivated.

CAIR has reported an unprecedented spike in bigotry targeting American Muslims, immigrants, and members of other minority groups in recent years.

If you are a victim of a hate crime or discrimination, please contact CAIR-Ohio by filing an incident report here.