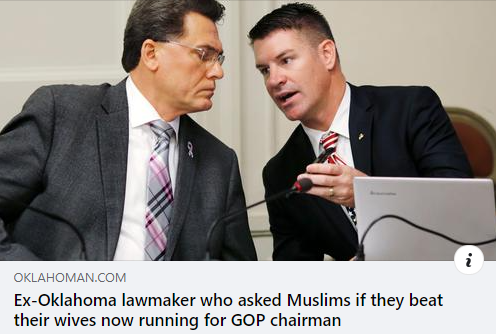 (OKLAHOMA CITY, OK 09/05/2021) – The Oklahoma Chapter of the Council on American-Islamic Relations (CAIR-OK) today condemned the public attacks on Islam and hate rhetoric targeting Islamic School children by Oklahoma GOP Chairman John Bennett. In a almost 9 minute video, Bennett makes false and offensive comments such as, “All of them tell us they are commanded by their God, which is Allah, to fight the entire non-Muslim world until Allah’s divine law, which is Shariah law, is imposed on every human being on earth,” and “If you just simply read from the most widely used textbook in Islamic schools here in the United States today, you will see what the 10 year old Muslim children are taught about Islam is the same as what Al-Qaeda or the Taliban teaches.”

SEE: Ex-Oklahoma Lawmaker Who Asked Muslims if They Beat Their Wives Now Running for GOP Chairman

“John Bennett has a long history dating back to 2013 of offensive attacks on Islam and the Oklahoma Muslim community,” said CAIR-OK Executive Director Adam Soltani. “It is past time that Republicans speak out and he be removed from a position of authority as he has proven repeatedly that he is unhinged and seeks only to spread hate, divisiveness, and promote violence towards innocent Muslims in our state and country.”

SEE: John Bennett and the Forces of Hate Have Taken Over the Oklahoma GOP

CAIR-OK calls on both elected officials to speak out and condemn this hateful rhetoric as well as for increased law enforcement protection for Islamic Schools and Mosques in Oklahoma, especially as we lead up to the twentieth year following the tragic September 11th attacks.