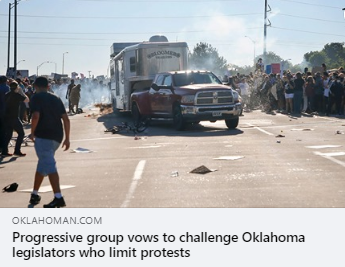 (OKLAHOMA CITY, OK, 4/14/2021) – The Oklahoma chapter of the Council on American-Islamic Relations (CAIR-OK) today condemned passage of HB 1674, which would criminalize certain forms of protest, enhance the sentences for protest-related acts and limit criminal and civil liability for drivers who strike protestors with their cars.

“This law is dangerous and meant to discourage Oklahomans from exercising their constitutional right to peaceful protest,” said CAIR-OK Government Affairs Director Lani R. Habrock. “This bill is one of many across the country seeking to suppress the voice of the people.”

CAIR-OK is urging Governor Stitt to veto HB 1674 and further urges all members of the Oklahoma State Legislature to support peaceful assembly and oppose all legislation aimed at diminishing constitutional rights.

HB 1674, which passed in the Senate today by a vote of 38 to 10, would create penalties for the obstruction of highways or roads. The bill also provides that organizations who “are found to be a conspirator” with those who obstruct highways or roads will incur fines that are ten times the amount of the fines assessed against the individuals in question.

Many local activists believe that this bill is in direct response to racial justice demonstrations and protests that occurred in the summer of 2020. Similar bills aimed at curtailing protests by enhancing criminal liabilities for protest-related acts have appeared throughout the legislative session.