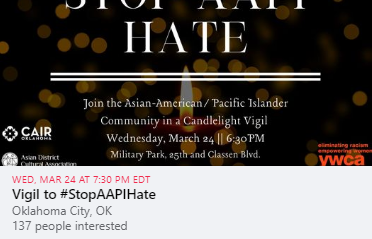 (OKLAHOMA CITY, OK, MARCH 22, 2021) – On Wednesday, March 24, the Oklahoma chapter of the Council on American-Islamic Relations (CAIR-OK will join the Asian-American/Pacific Islander (AAPI) community of Oklahoma City at a candlelight vigil to be held in Military to honor the lives lost in the shooting in Atlanta, Ga, as well as in other racially-motivated attacks on Asians across the U.S.

WHAT: Vigil to Stop AAPI Hate

(BACKGROUND: Robert Aaron Long, 21, was arrested on Tuesday night in Atlanta, Ga, after the killings of 8 people, 6 of whom were Asian-American women, one white woman, and one white man, in the Atlanta metro area. The murders are the latest in a string of violent attacks against Asians across the United States, many of which targeted women.)

SEE: There were 3800 anti-Asian racist incidents, mostly against women, in past year

CAIR-OK, the YWCA of Oklahoma City (YWCA of OKC), and the Asian District Cultural Association (ADCA) are cosponsoring the event, which will feature speakers from across the community and end with a moment of silence for participants to acknowledge however they choose.

“This tragedy is just one of a string of attacks on the Asian community that prove we have a lot of work to do in addressing racialized and gender-based violence,” said Veronica Laizure, CAIR-OK Civil Rights Director. “The AAPI and other marginalized communities must come together with our allies to fight racism, xenophobia, and bigotry wherever it occurs, and to stand together against the forces of hate that we’ve seen time and time again.”

“This surge in violence against the AAPI community is nothing new,” said Cindy Nguyen, Director of Social and Economic Justice at the YWCA OKC and founder of the Asian Task Force on Domestic and Sexual Violence. “The horrific tragedy in Atlanta is a result of the intersections between racism, misogyny, and rampant xenophobia faced by Asian women. We hope by holding this vigil, we send a message to our AAPI community that they are not alone.”

“ADCA hopes to bring our partners as well as city and state leaders to rally with us in hopes of bringing a call to action for peace, unity, inclusion, and equity between all minority communities,” said Thuan Nguyen, President of the Asian District Cultural Association.

“In diversity there is beauty, in unity there is strength,” added Jennifer Ly, Board Member of ADCA.

NOTE: The Asian American Journalists Association has released a pronunciation guide for the names of the victims with Chinese-language and Korean-language names