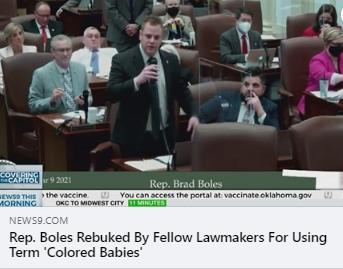 (OKLAHOMA CITY, OK, 3/10/2021) — The Oklahoma chapter of the Council on American-Islamic Relations (CAIR-OK), Oklahoma’s largest Muslim civil rights and advocacy organization, today condemned the use of racist rhetoric on the state House Floor and called on House leadership to take decisive and swift action.

“Although Representative Boles has apologized, stating this was a ‘slip of the tongue,’ such ‘slips’ are indicative of the racism and bias that continue to be a problem at the state legislature year after year,” said Lani R. Habrock, Government Affairs Director of CAIR-OK. “Until we acknowledge systemic anti-Black racism and implicit bias, we cannot address it. Simply sweeping ‘slips of the tongue’ under the rug allows inequities to persist and further humiliates our state as a whole.”

In a statement, CAIR-OK Executive Director Adam Soltani called on Oklahomans to voice their concerns to Representative Boles and Oklahoma House leadership saying:

“Rep. Boles – your use of the term ‘colored’ to describe Black babies during debate on an anti-abortion bill is highly offensive and hurtful to so many people of our state, including many members of the Oklahoma Muslim community. Your apology is insufficient, and I sincerely believe that you cannot justify your statement by saying it is a ‘slip of the tongue.’ If you truly care about the people you represent and the people of Oklahoma, you should issue a proper apology and work toward instituting training for conscious and unconscious bias for all members of the Oklahoma House of Representatives in the hopes that something like this never happens again.”

CAIR-OK urges the legislature to adopt more policies of Inclusion and Diversity training as well as training on white privilege and implicit bias.