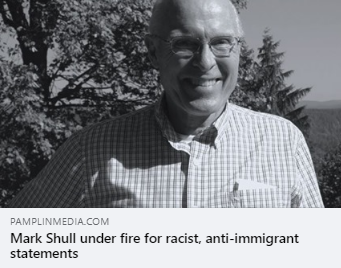 (PORTLAND, OREGON, 1/11/21) – The Oregon Chapter of the Council on American-Islamic Relations (CAIR-Oregon), today called for Clackamas County Commissioner Mark Shull to resign over a history of racist and xenophobic comments.

Shull has a documented history of making racist, xenophobic and Islamophobic comments on their personal social media page on Facebook. That page was the same personal page they used to help promote their candidacy for Clackamas County Commissioner this last year.

“We are disappointed to see that Commissioner Shull cannot differentiate between valid information and conspiracy theories. Those conspiracy theories jeopardize community members’ lives. Thus, we are calling for Mark Shull to resign from office.

These dangerous comments coming from an elected official are not representative of those they’re sworn to serve. There are many Muslim (among the many other identities) residents in Commissioner Shull’s district and they may increasingly suffer the obvious threats to their lives as these ideologies perpetuate.”

Muranovic added, “At a time of heightened violence against Black and brown community members and our Muslim community, this rhetoric is reckless and dangerous, as shown by the extremist actions in our nation’s Capitol last week.”

“We have traitors in our own US government. These two asshats [derogatory meme of Rashida Tlaib and Ilhan Omar] are just two examples. There are more, many more. Islam and its followers are incompatible with our nation, our society and our future.” (January 5, 2020)

Additionally, Shull has also made statements against Black and trans people:

“BLM is not about black lives mattering or any other life mattering. BLM is a pawn for the rise of neo Marxism.” (June 28, 2020)