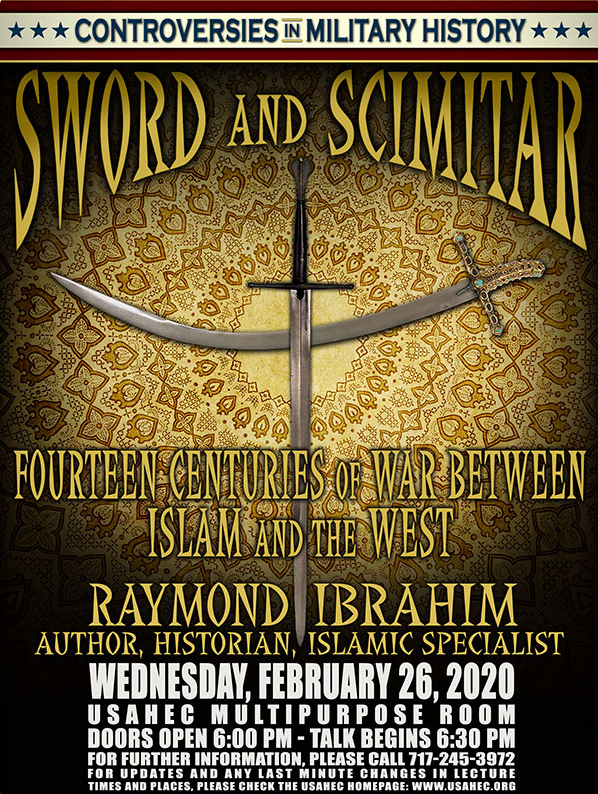 Last year, the college postponed a similar speaking engagement with Ibrahim in response to widespread criticism. In response to postponement of his 2019 lecture, Ibrahim restated his bigoted claim that “Islamic terrorism and ‘extremism’ are intrinsic to Islam, and have been from its first contact with Western civilization in the seventh century.”

This year, Ibrahim is being hosted by the college’s U.S. Army Heritage and Education Center (USAHEC).

Ibrahim’s writings advance a discredited theory known as the “Clash of Civilizations” and argues that “Islam and the West” have been engaged in a centuries-long war. The lecture is based on Ibrahim’s 2018 book “Sword and Scimitar: Fourteen Centuries of War between Islam and the West.” That book promotes the unsubstantiated thesis that Islam, since its beginning, has “terrorized the West.”

When Ibrahim was asked, “Is there any chance of an accommodation between Islam and Western societies or this is just wishful thinking?,” he replied, “Can water and oil mix?”

He also stated: “[Islam] is entirely built on the purported teachings of a seventh century Arab—who for all accounts acted like a seventh century Arab, meaning tribal and uncivilized. Obviously, if this man was a false prophet — a liar — which is the default, non-Muslim position, then it should be unsurprising that the entire worldview his followers follow, which is tribal and uncivilized, is creating a constant clash with other civilizations.”

Also: “[T]he hate for Christians and other non-Muslims, including secularists/atheists in the West, did not begin with ISIS, al-Qaeda, Ansar al-Sharia, Boko Haram, or Al Shabaab. It began with Muhammad and his companions, 1,400 years ago.”


“Just as no educational institution should ever invite a racist to teach African-American history or an anti-Semite to teach Jewish history, the U.S. Army War College should not have — twice — invited an anti-Muslim bigot to teach Islamic history.


“By endorsing hypocritical, ahistorical and hateful teachings about Islam, the college has declared that the thousands of American Muslims who serve in the U.S. military are not welcome at the school. We hope the college administration will reconsider its decision and disinvite Ibrahim.”

CAIR-Philadelphia is inviting all veterans and concerned citizens to call the U.S. Army War College at 717-245-3972 to register their concerns.

In 2019, CAIR-Philadelphia sent a letter to the U.S. Army War College requesting the removal of Ibrahim’s lecture from the college’s prestigious 50th Annual Lecture Series.

The letter said: “Mr. Ibrahim’s analysis is based on poor research and carries a high potential to instigate hatred against Muslims. We are deeply concerned that his troubling views would skew our servicemen and servicewomen’s perceptions of Islam and Muslims.”

Led by CAIR-Philadelphia and MPower Change, and supported by Community Responders Network, About Face, and Common Defense, the campaign drew more than 1800 signatures and received widespread support from its interfaith allies.

CAIR has reported an unprecedented spike in bigotry targeting American Muslims and members of other minority groups since the election of Donald Trump as president.

Also last year, The Washington-based civil rights organization released a groundbreaking report, called “Hijacked by Hate: American Philanthropy and the Islamophobia Network,” listing the philanthropic foundations, many of them mainstream, that were used by anonymous special interest donors to funnel almost $125 million to anti-Muslim hate groups between 2014 and 2016.