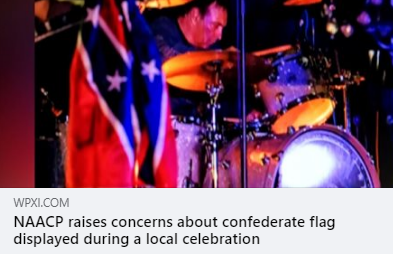 (PITTSBURGH, PA, 11/11/20) — The Pittsburgh chapter of the Council on American-Islamic Relations (CAIR-Pittsburgh), the nation’s largest Muslim civil rights and advocacy organization, today shared the NAACP’s concerns about the use of a Confederate flag on display during a local celebration in Charleroi.

During Charleroi’s virtual Community Days Celebration, a Confederate flag was visible on stage as a band performed inside the municipal building, last month.

David Hunter, Mon Valley NAACP president, said he received screenshots showing the flag in clear view, wrapped around a microphone stand. Hunter voiced his concerns at Tuesday’s Charleroi council meeting. Mark Alterici, Charleroi council president, apologized and stated he had not noticed the flag with so much going on.

In a statement, Christine Mohamed, Executive Director for CAIR-Pittsburgh said:

“We join the NAACP in expressing concerns about the use of the Confederate flag during a public event. The display of this flag — a symbol of hate and oppression — at a community celebration sends a message in contradiction to the American values of freedom and equality for all. We are glad for the swift action of the Charleroi Council; however, we expect the council to be fully aware of who is representing their community and values during such events.”