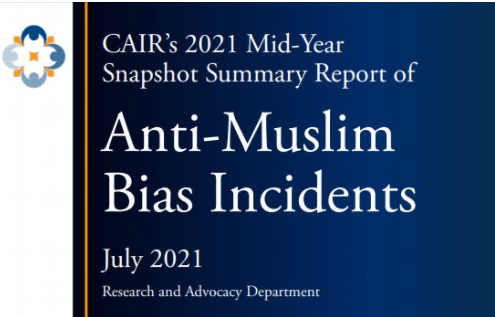 The D.C. based civil rights group documented over 500 complaints of anti-Muslim bias incidents between January and July 2021 alone.

In this report, CAIR presents some of the most severe cases it has observed over the past seven months. The report highlights 38 anti-Muslim bias incidents from the hundreds of cases CAIR has documented, which include hate crimes, harassment, school bullying, discrimination, hate speech, and anti-mosque incidents. CAIR’s belief is that these cases can provide the public a glimpse of the day-to-day lives of Muslims in America who continue to face the deadly threat of Islamophobia.

Key findings of CAIR’s report include:

4) CAIR has noted an increase in anti-Muslim hate crimes in Canada following a vehicular murder that killed three generations of a Canadian Muslim family in June.

“This report serves as a reminder of the severe nature of Islamophobia and what needs to be done to combat it in the United States and around the world. Islamophobia is hardly an American phenomenon—but very much a global scourge. I urge our elected officials to take the steps laid out within this report to quell the anti-Muslim racism here and abroad.”

“It is time for the Biden administration to take the threat posed by global Islamophobia to Muslims worldwide and American Muslims at home and travelling abroad seriously. As the proliferation of anti-Muslim bigotry continues, the United States must live up to its principles of defending human rights and freedom for all communities.”

“Islamophobia should not be normal. I can tell you that many Muslims around this country and around the world, those who live as minorities, they started to feel that Islamophobia is part of normal life. It should not be, and we should not accept it. Islamophobia is a danger and threat not only to Muslims but to all our societies and the peace of our communities.”