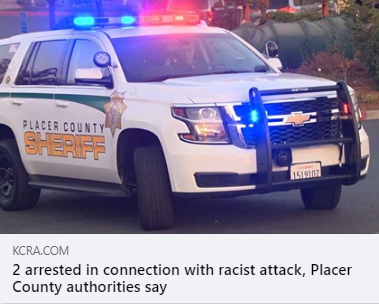 (SACRAMENTO, CA, 09/03/2020) – The Sacramento Valley office of the Council on American-Islamic Relations (CAIR-SV) today condemned a reported racist assault in Placer County and welcomed the arrests of two suspects.

Late last Friday, Placer County sheriff’s deputies responded to reports of an incident at the Speedway Gas Station off of Drive-In Way in the Auburn area. Witnesses reported that a male and female yelled racist slurs at a victim, and then the male allegedly punched and stabbed the victim.

The duo walked off after the assault, according to the Sheriff’s Office, but they were detained less than a mile away.

The Sheriff’s Office reports that Cory Smith, 35, and Jaylynn Garrell, 23, have been charged with conspiracy, assault with a deadly weapon and a hate crime. Smith was additionally charged with battery, possession of a controlled substance and carrying a concealed dagger, while Garrell was also charged with violating her probation terms.

“We condemn this shocking racist attack and welcome the arrests and hate crime charges. Amid an apparent rise in hate incidents, it is more important than ever to stand up to racism whenever and wherever we see it. This is yet another incident that underscores how far we have to go to combat bigotry, along with the importance of implementing an inclusive ethnic studies curriculum and the need to uplift marginalized voices. We hope the victim is able to recover – both mentally and physically – from this sickening assault.”

Elkarra urged community members to report any bias incidents to law enforcement and to CAIR Sacramento Valley/Central California’s Civil Rights Department at 916-441-6269 or by filing a report at http://bit.ly/cairsvcccivilrights.