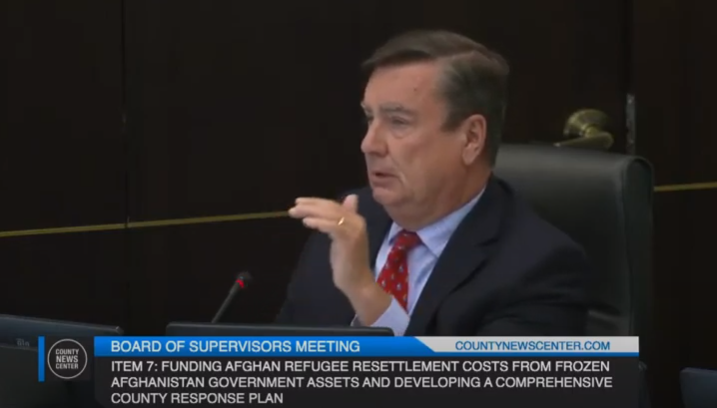 (SAN DIEGO, CA, 10/7/21) – The San Diego chapter of the Council on American-Islamic Relations (CAIR-San Diego) today called on the San Diego Board of Supervisors to issue an official reprimand for District 2 Supervisor Joel Anderson’s “Islamophobic smears” made against the nation’s largest Muslim civil rights and advocacy organization at the board’s Oct. 5 meeting.

41:36: Exclusion of CAIR from Task Force

“We were appalled to hear that supervisor Anderson regurgitated vile Islamophobic smears to target the nation’s largest Muslim civil rights and advocacy organization that has a decades-long history of defending the civil and religious rights of all Americans,” said CAIR San Diego Associate Executive Director Tazheen Nizam. “Supervisor Anderson needs to apologize for his false and irresponsible comments and the board needs to issue an official reprimand for his Islamophobic actions.”

She added that Anderson’s smears will undermine the needed efforts of the Afghan refugee resettlement process and could endanger CAIR-San Diego staff.

Nizam cited bias motivated attacks on a synagogue and mosque in San Diego County. She said: “These incidents are often the result of ignorance, hatred and demonizing rhetoric such as that advanced by Supervisor Anderson.”

Since the beginning of the recent Afghan refugee and resettlement crisis in early August, CAIR-San Diego has helped families complete Humanitarian Parole applications to bring family members home. In addition, CAIR-San Diego has convened educational workshops, along with a local immigration attorney, to answer questions and complete Humanitarian Parole applications. Currently CAIR-San Diego is working with community-based organizations and resettlement agencies to ensure the refugees are getting the help they need.

Do you like reading CAIR-SD press releases and taking part in our action alerts? You can help contribute to CAIR-SD’s work of defending civil rights and empowering American Muslims across the country by making a one-time contribution or becoming a monthly donor. Supporters like you make CAIR-SD’s advocacy work possible and defeating Islamophobia an achievable goal. Click here to donate to CAIR-SD.