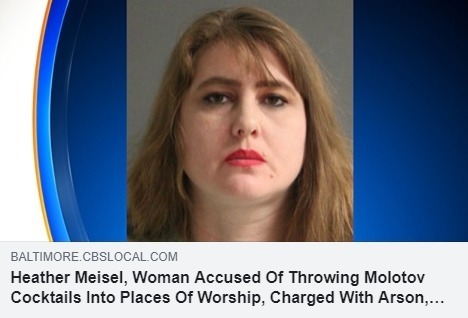 According to police, on February 12, Heather Meisel, 43, of Halethorpe, smashed windows and threw Molotov cocktails (fire bombs) into Masjid Mustafa Islamic Center in Baltimore County, and allegedly tossed an explosive into a Jehovah’s Witness Kingdom Hall in Glen Burnie.

“Houses of worship are sanctuaries that deserve to be safeguarded and protected,” said CAIR’s Director in Maryland Zainab Chaudry. “We are calling for hate crime charges in this case because anyone who violates that sanctity must be prosecuted to the fullest extent of the law.”

According to reports, Meisel has been charged with first-degree arson and attempted murder, but CAIR is calling on prosecutors to also add hate crime charges. Meisel allegedly said she “wanted to send a message” to the faith communities through the attacks and is currently being held without bond at a correctional facility in Annapolis.

Yesterday, CAIR marked the one-year anniversary of the terror attacks on mosques in Christ Church, New Zealand that claimed the lives of 51 innocent Muslims, by calling for unity.

“As we honor the memory of all those murdered one year ago in New Zealand, we call on people of all faiths worldwide to unify in repudiating the growing white supremacism, racism and Islamophobia that is poisoning so many communities and inevitably results in such violence. It is only through unity and the rejection of hatred and bigotry in all forms that we can prevent such tragedies in the future.”