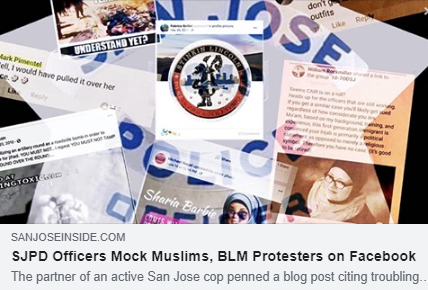 On a private Facebook group named 10-7ODSJ, a retired SJPD police officer posted a link about a Los Angeles police officer pulling off a woman’s hijab. Mark Pimentel, an active SJPD officer who was recently documented policing protests while refusing to wear a mask, reportedly commented on the post “Hell, I would have pulled it over her face.” When another retired police officer posted about Black Lives Matter, calling them “racist idiots,” “un-American” and “enemies”. Mark Pimentel, again, chimed in and replied “black lives really don’t matter”.

In 2015, Sergeant Chris Sciba posted a graphic image on his Facebook page which stereotyped all Muslims as being terrorists. He is currently an SJPD trainer on race-bias policing. The author of the Medium article writes, “They (SJPD) hired Sciba to teach on the very subject of race-bias policing, we have to ask if SJPD shares the same view that Sciba has on Muslims, and allows such racist stereotypes to exist.”

In response to San Jose Insider’s reporting, Mayor Sam Liccardo condemned the comments and called for action. An investigation has been launched by SJPD Chief Eddie Garcia.

Zahra Billoo, Executive Director of CAIR-SFBA said in a statement:

“At a time of rising concern around long-entrenched police violence targeting Black and Brown communities, these officers seemed to have no qualms voicing their racist perspectives and threats. If they speak this way online, how are we to believe that we are safe from them on the streets? While the mayor, chief, and union’s swift condemnations are heartening, we need action. Any current officers involved in this or other misconduct must be immediately terminated and we would warn other police departments against re-hiring them. Further, Santa Clara County District Attorney Jeff Rosen, must commit resources to reexamining any cases or convictions these officers were connected to.”

Hatem Bazian, Chair of the Northern California Islamic Council said in a statement:

“These social media posts add another data point to illustrate the serious problem of anti-Black racism and Islamophobia, which further diminishes the Muslim community’s trust in police departments and leads us to question their commitment to serve and defend the constitutional and civil rights of all Americans.”

Daniel M. Mayfield, Attorney at Carpenter and Mayfield said in a statement:

“The District Attorney must review all of the cases that involve the named officers and those who have covered up their crimes. The reason is simple: What may have originally looked like a valid reason for a car stop, or an interrogation, is now suspect. If the officer’s actions were even partially driven by racial or ethnic hatred then the contact with the officer, and the officer’s subsequent actions, should now be questioned.”