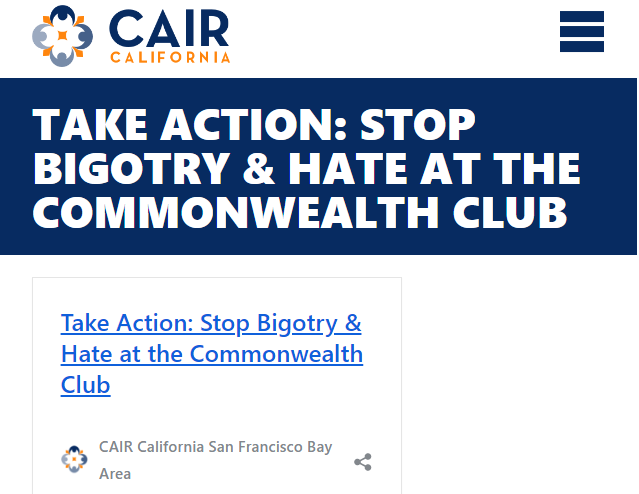 (SANTA CLARA, CA, 2/11/2021) – The San Francisco Bay Area office of the Council on American-Islamic Relations (CAIR-SFBA) today strongly condemned the Commonwealth Club’s decision to ignore concerned community organizations and members and proceed with an event featuring anti-Muslim and anti-Palestinian speakers Ayaan Hirsi Ali and Bari Weiss scheduled for this evening. It further welcomed the resignation of at least one of the Club’s InForum board members, Femily, who cited the Club’s insistence on proceeding with the event as her basis for departing the organization.

Hirsi Ali has called for the U.S. Constitution to be altered to allow for discrimination against Muslims and supported violence against Muslims, declaring that “we are at war with Islam” and calling for Islam itself to be “defeated” militarily.She has been labeled an anti-Muslim extremist by the Southern Poverty Law Center. Weiss has consistently smeared American Muslims on the forefront of civil rights today and has targeted those who speak up for Palestinian human rights, both in the U.S. and abroad.

CAIR-SFBA and numerous other leaders and organizations, followed by nearly 1,500 individuals, have contacted the Club’s CEO, Dr. Gloria Duffy, and leadership staff with these concerns, sharing widely available information about the speakers’ track records. Last week, CAIR-SFBA urged the club to cancel the event, noting these fringe speakers are contrary to the Club’s mission.

“This is an affront to the over one thousand Muslims and allies who, in the past several days, joined us in calling for the Club to cancel this event. The region’s thriving American Muslims and many reputable organizations are far better equipped to lead a conversation about Islam and immigration. Yet the Commonwealth Club has decided to lend their platform to unqualified and hateful speakers who have no place in mainstream society.”

CAIR-SFBA is an office of CAIR, the largest Muslim civil liberties and advocacy organization. Its mission is to enhance understanding of Islam, protect civil rights, promote justice, and empower American Muslims.