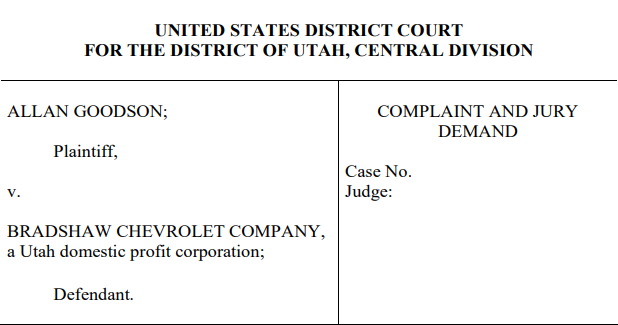 (WASHINGTON, D.C., 8/2/21) — The Council on American-Islamic Relations (CAIR) and Strindberg & Scholnick law firm today announced the filing of an employment discrimination lawsuit against Bradshaw Chevrolet in Utah on behalf of Allan Goodson, who asked to take short prayer breaks at work but was instead harassed and fired.

Goodson, an automotive technician at Bradshaw, converted to Islam while employed at the car dealership in Cedar City. When he asked his supervisor for permission to take two, 5-10 minute prayer breaks at work, his supervisor denied him that religious accommodation. Goodson also asked to shift his work hours so he could attend a one-hour religiously-mandatory congregational prayer on Friday, a request that Bradshaw denied to Goodson but approved for others and for non-religious purposes.

After converting to Islam, Goodson’s supervisor and Bradshaw employees harassed him because of his faith. Co-workers asked Goodson whether he “blew up any buildings over the weekend” and demanded he “change his name to Mohammad” and “marry a five-year-old-girl.” When Goodson reported the discrimination to the U.S. Equal Employment Opportunity Commission Bradshaw terminated Goodson, on not one, but two separate occasions and for two different reasons.

“We filed this lawsuit just after Pioneer Day, a day meant to celebrate the Mormon pioneers who crossed the country to avoid religious discrimination and find a place to practice freely. It is appalling that almost 200 years later, a man holding different religious beliefs is suffering harassment and being denied the right to practice his religion here in Utah.” said attorney Lauren Scholnick.

Goodson brings his case under Title VII of the Civil Rights Act.

“Allan’s received so much support from communities in Utah and across the country. We’re hopeful that this lawsuit will ensure that what happened at Bradshaw will never happen again,” said CAIR attorney Zanah Ghalawanji.

She added that her Washington, D.C.-based civil rights organization offers a booklet, called “An Employer’s Guide to Islamic Religious Practices,” to help employers gain a better understanding of Islam and Muslims in the workplace.