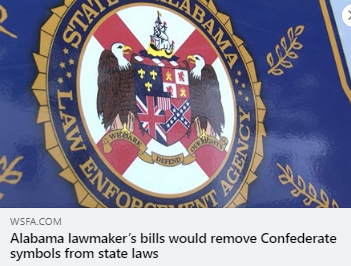 (WASHINGTON, D.C., 2/5/2021) – The Council on American-Islamic Relations (CAIR), the nation’s largest Muslim civil liberties and advocacy organization, today supported three critical bills introduced into Alabama’s state legislature that would remove the Confederate flag from the state’s coat of arms and remove language that glorifies the Confederacy from state laws.

In Montgomery, Ala., Rep. Laura Hall has introduced three bills that would remove Confederate language from Alabama Legislature and from other state symbols.

The first bill would alter the coat of arms, originally adopted in 1939, by replacing the confederate flag with the state flag of Alabama. The coat of arms is currently displayed on the state militias uniform including the National Guard and the Naval Militia.

The second bill would also ban these groups from wearing civil war memorabilia. It would forbid the Sons of Confederate and Federal Veterans and the Daughters of the Confederacy from using the State Armories as a site to host their meetings.

The final bill would change certain language in the legislature such as praising the Confederate White House.

“We support any effort by state lawmakers to erase the tragic legacy of anti-Black racism and white supremacy that the Confederacy fought to preserve,” said CAIR National Communications Director Ibrahim Hooper.

Hooper said Washington-based CAIR and the American Muslim community are standing in solidarity with all those challenging anti-Black racism, Islamophobia, anti-Semitism, and white supremacy.