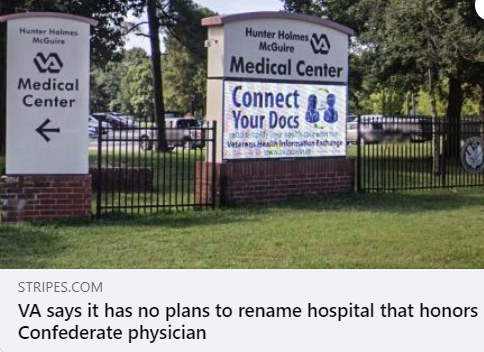 Hunter Holmes McGuire was a doctor in the Confederate army and was the personal doctor to Stonewall Jackson, one of the most famous Confederate generals of the Civil War. The doctor reportedly suggested castrating Black men and was accused of sexual crimes.

SEE: VA says it has no plans to rename hospital that honors Confederate physician

The VA Has a Hospital Named for a Slavery-Supporting Confederate Doctor. And It Won’t Change, Wilkie Says

“We support renaming this medical center to instead honor one of the many Black men and women who died in the Civil War to free this country from slavery and white supremacy. Rather than honoring and memorializing those who stood for racism, we should honor Americans who risked their lives for equality and freedom.”

She said CAIR and the American Muslim community are standing in solidarity with all those challenging anti-Black racism, xenophobia, Islamophobia, anti-Semitism, and white supremacy.