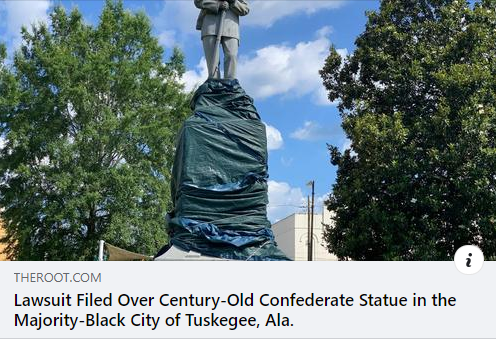 (WASHINGTON D.C., 9/13/2021) – The Council on American-Islamic Relations (CAIR), the nation’s largest Muslim civil rights and advocacy organization, today supported a lawsuit to remove a Confederate monument in the mostly Black city of Tuskegee, Ala.

The lawsuit, which was filed on behalf of the Macon County Commission and three Black residents, argues that the land on which the statue stands was illegally given to the United Daughters of the Confederacy (UDC) in 1902. The land was reportedly provided to the UDC as a park exclusively for white people. The Tuskegee chapter and Alabama divisions of the UDC are defendants in the case, according to reports by WFSA-TV. The statue, which depicts a Confederate soldier, has been the site of numerous protests.

SEE: Lawsuit Filed Over Confederate Monument in Tuskegee, Ala.

“Symbols of white supremacy and systemic anti-Black racism have no place anywhere in public spaces, especially not in a historic Black city,” said CAIR National Communications Coordinator Ismail Allison. “We support the lawsuit to remove the monument and encourage leaders nationwide to remove all symbols of hate and racism from their cities.”

Allison said the American Muslim community and CAIR stand in solidarity with all those challenging anti-Asian and anti-Black racism, xenophobia, Islamophobia, anti-Semitism, white supremacy, and all other forms of bigotry.