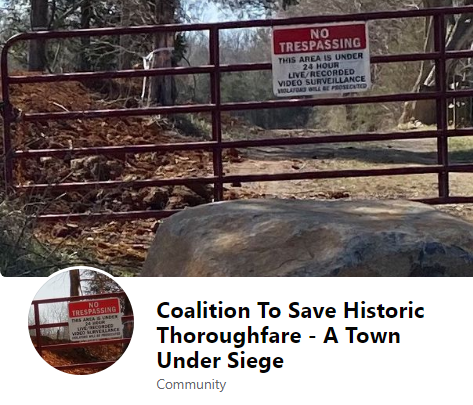 (WASHINGTON, D.C., 5/17/21) – The Council on American-Islamic Relations (CAIR), the nation’s largest Muslim civil rights and advocacy organization, today offered support for a demand to stay all development activity on African-American and Native American cemeteries and surrounding areas in the town of Thoroughfare, Va.

On Tuesday, May 18 (6 p.m.) theCoalition to Save Historic Thoroughfare (CSHT) will hold a news conference outside the Prince William County Government Administration Center in Woodbridge, Va.

In addition, the coalition will demand that the investigation of the Scott cemetery bulldozing be re-opened based on newly-uncovered information.

A soil specialist also found signs of topsoil removal and grading in desecration of Scott Cemetery, refuting county findings and landowner’s denial of such actions.

In a statement prior to the Tuesday news conference, Coalition to Save Historic Thoroughfare spokesperson Frank Washington said:

From enslavement to freedom and ultimately prosperity, Thoroughfare Town — nestled within the protection of the Rural Crescent – represents the living history of Prince William County and Virginia.

The way in which the county board responds to the threats targeting the history and legacy of Thoroughfare will serve as a road map for our future.

It isn’t enough to wonder aloud, “How did this happen?” Action is required to stop the destruction and manipulation of our history.

The parcels, purchased by measures that excluded an opportunity for participation by those directly impacted, must be returned to their owners.  The souls of the ancestors must be allowed to have peace, and their desecrated resting place must be restored and honored.

They deserve to be honored with the dignity and respect they were denied while they walked this very soil, which we now pledge to preserve.

What is happening at Thoroughfare is the result of greed to develop, without thought given to protect those things that money cannot buy back once lost – our history and our environment. It is time our county followed the path less traveled by preserving the places that tell the story of our past.

For too long, resources have been invested in conserving land and parks dedicated to war.  It is time to elevate the history of our collective American journey. The preservation of historic places like Thoroughfare is where that seed needs to flourish.

Let us heal as a nation. We believe that healing begins right here at home.

Thoroughfare Town needs help now – not in a week, not in two weeks, not in a month. Each day that an order of stay is not implemented by the Prince William County government, the history of a community — which survived enslavement — is at risk.

We are running out of time.

The cemeteries are the final resting places of at least 300 slaves, freedmen/freedwomen and Native-Americans. In response to recent desecration, CSHT and several Native-American groups held the ceremony to honor those souls who have been recently disturbed.

During a May 4 board meeting, Supervisor Pete Candland promised “to hold the county accountable” for not preventing the damage to one historic cemetery.

LETTER: Pledge to protect Thoroughfare must be put into action https://www.princewilliamtimes.com/opinion/letter-pledge-to-protect-thoroughfare-must-be-put-into-action/article_e95f0da8-aee7-11eb-8739-13c5ce172d87.html

In a statement, Shelia Hansen, of the American Indian Movement said:

The Native American community supports our relatives in Thoroughfare as they strive to save our joint history, cemetery and legacy.”

The town of Thoroughfare was established and settled by freed African-American slaves and Native Americans. Homes and family cemeteries in this community date back to 1860 and earlier.

Descendants of freed slaves and Native-Americans still live in Thoroughfare.

Slaves, freed slaves, freedmen/freedwomen, and Native-Americans who worked and lived on the land of Thoroughfare, Va., are under the threat of having their final sacred resting places decimated or completely removed by encroaching developers. Family members are also being denied access to many of these graves.

Historic freed slave homes, land and structures are under the same threat of destruction and at risk of being lost.