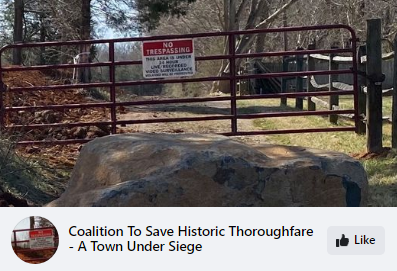 On Saturday, April 10 (11 a.m.), the Coalition to Save Historic Thoroughfare will hold a news conference at 16113 John Marshall Highway, Broad Run, Va., to protest the threat of obstructed access to and possible removal of a historic African-American cemeteries in the town of Thoroughfare, Va., a town established by freed slaves, freedmen/freedwomen and Native-Americans. [NOTE: The historic Thoroughfare is located near Broad Run, Va.]

WHAT: Protest Over Threat to African-American Cemeteries in Thoroughfare, Va.

SEE: Coalition to Save Historic Thoroughfare – A Town Under Siege

The town of Thoroughfare was established and settled by freed African-American slaves and Native Americans. Homes and family cemeteries in this community date back to 1860 and earlier.

Descendants of freed slaves and Native-Americans still live in Thoroughfare.

Slaves, freed slaves, freedmen/freedwomen, and Native-Americans who worked and lived on the land of Thoroughfare, Va., are under the threat of having their final sacred resting places decimated or completely removed by encroaching developers. Family members are also being denied access to many of these graves.

Historic freed slave homes, land and structures are under the same threat of destruction and at risk of being lost.