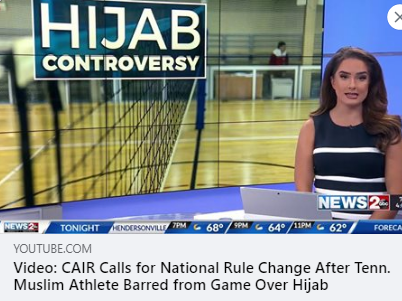 (WASHINGTON, D.C., 12/11/2020) – The Council on American-Islamic Relations (CAIR), the nation’s largest Muslim civil liberties and advocacy organization, today offered its support for a move by the Harrison County Board of Supervisors in Mississippi to vote to remove a Confederate monument and welcomed a Tennessee association’s vote to allow student athletes to wear hijab without seeking a waiver.

In Mississippi, the Harrison County Board of Supervisors will vote on whether to remove the Confederate monument that has stood outside the county courthouse since 1911. The issue has been debated since June, resulting in two protests.

SEE: Will the Confederate monument come down in Harrison County? Supervisors set to vote.

In Tennessee, the association that oversees high school and junior high school sports approved an addition to its rules to allow athletes with religious headwear to play without seeking a waiver. The amended bylaws were unanimously approved by the Tennessee Secondary School Athletic Association (TSSAA) on Thursday and will go into effect immediately.

The addition states: “Religious headwear is permitted, provided it is not abrasive, hard, or dangerous to the participant and any other player, and must be attached in such a way it is highly unlikely to come off during play. Religious headwear does not need to comply with any of the color restrictions defined in applicable sport uniform codes.”

CAIR previously called for Tennessee to change its rules on religious headwear for players after a hijab wearing athlete was disqualified from a sporting event.

“All Americans should stand with those seeking to remove barriers to a just society that rejects racism, respects diversity and promotes inclusion.”