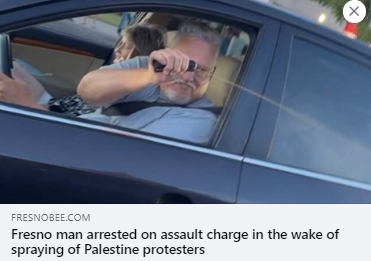 (FRESNO, CA, 5/17/21) – The Sacramento Valley/Central California office of the Council on American-Islamic Relations (CAIR-SV/CC) today welcomed the arrest of a suspect in the reported pepper-spraying of protesters at a Fresno rally Saturday in support of Palestine. CAIR-SV/CC also called for a hate crime investigation into the incident.

Ahmad Qutami posted about the incident on Twitter, asking people to help identify the man who Qutami said was “shooting pepper spray” at the protesters.

The Fresno Bee was told that the suspect had yelled, “‘F*** all of Palestine” and “We don’t support Palestine,” before he began spraying.

Brian Lee Turner, 62, was arrested Sunday on suspicion of assault with a caustic chemical or flammable substance, according to the Fresno County Jail “Inmate Search.”

Other incidents targeting protesters were also reported to CAIR-SV/CC.

“CAIR-SV/CC welcomes the arrest of a suspect in this attack and encourages authorities to conduct a hate crime investigation. These protesters were practicing their First Amendment rights when they were targeted in this disturbing assault.”

Hussain urged community members to report any bias incidents to law enforcement and to contact CAIR-SV/CC’s Civil Rights Department at 916-441-6269 or by filing a report at bit.ly/cairsvcccivilrights.