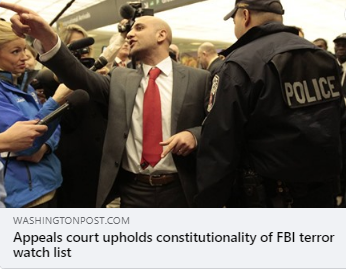 (WASHINGTON, D.C., 3/31/21) – The Council on American-Islamic Relations (CAIR), the nation’s largest Muslim civil rights and advocacy organization, said today it will ask the entire U.S. Court of Appeals for the 4th Circuit to review a decision yesterday by a three-judge panel upholding the terror watchlist and overturning a district court decision that declared the program unconstitutional.

CAIR has mounted a nationwide challenge to the government’s Terrorist Screening Database because there is no meaningful way to remove the names of those wrongfully placed on the list – which can lead to difficulty traveling for innocent people.

In 2019, a federal district court ruled the watchlist unconstitutional, citing the harm the secretly program has caused to American citizens, including numerous Americans, placed on the list without any clear recourse. Yesterday, three judges–two appointed by President Trump, and one appointed by President Bush–overturned that ruling.

“When CAIR began our nationwide litigation campaign to end the government’s Orwellian and unconstitutional watchlist program more than a decade ago, we knew that there would be victories and defeats along the way.Our strategy reflects this reality, with cases pending in courts across the country — from Oregon to Maryland to Michigan to Texas.

“Yesterday, a three-judge panel on the Fourth Circuit reversed a historic district court decision that declared the entirety of the watchlist unconstitutional. In doing so, the judges ignored the dire consequences experienced by American citizens placed on the watchlist and took a dim view of what the Constitution requires. We are disappointed in this decision, but we remain undeterred. The fight is not over.

“And whatever the outcome, CAIR’s legal strategy has never relied on any single case. Today, CAIR has cases pending in courts within the Ninth Circuit, the Fifth Circuit, the Sixth Circuit, and even other kinds of watchlist challenges in the Fourth Circuit. Altogether, we currently represent almost 50 Muslims in other court cases. And so long as one of those cases succeeds, inshallah, our entire community will benefit.”

In January, CAIR attorneys argued in the United States Court of Appeals for the Fourth Circuit in support of the Muslim civil rights organization’s constitutional challenge to the federal government’s Terrorism Screening Database that anchors the watchlisting system.

In September 2019, a lower court judge held that the watchlisting system is broadly illegal and violates the rights of the 23 Muslims who CAIR represents in the case.

CAIR’s position is supported by a broad and ideologically diverse group of amici (friends of the court), including the CATO Institute, ACLU, the Brennan Center for Justice, the Firearm Policy Coalition, Korematsu Center, Rutherford Institute, and the Electronic Frontier Foundation.