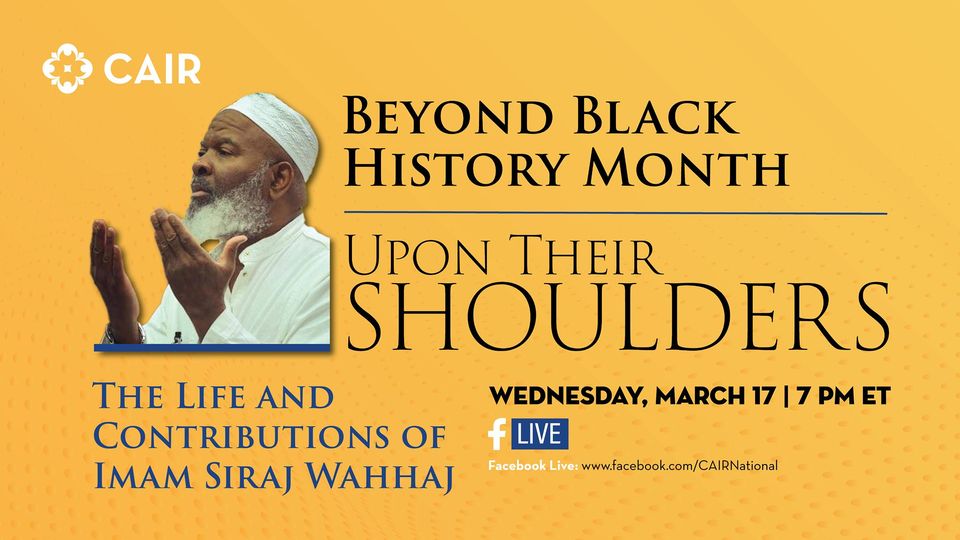 (WASHINGTON, D.C., 3/12/2021) – On Wednesday, March 17, the Council on American-Islamic Relations (CAIR), the nation’s largest Muslim civil liberties and advocacy organization, will host a virtual Beyond Black History Month event, titled “Life and Contributions of Imam Siraj Wahhaj,” as part of its “Upon Their Shoulders” campaign.

The event will feature shared experiences and life lessons from Imam Siraj Wahhaj and from those who know him and his contributions to the empowerment of the American Muslim community over decades.

For some 40 years, Imam Siraj Wahhaj has been a nationally and internationally recognized Islamic community leader and activist with a message “rooted in hope, faith and the power of redemption.”

“Siraj Wahhaj is Imam of the Al-Taqwa Mosque in Brooklyn, a prolific lecturer, community activist, the leader of the Muslim Alliance in North America, and former Vice President of ISNA. He first became famous for his successful efforts in fighting drugs and crime in his neighbourhood. In 1991, he became the first Muslim to recite the Opening Prayer of the Qur’an (Al-Fatiha) at the US House of Representatives. Brooklyn Borough President, Marty Markowitz, proclaimed August 15, Siraj Wahhaj Day in honour of his “lifetime of outstanding and meaningful achievement.”

“Imam Siraj’s principled work over the past decades has been instrumental in the amazing growth and empowerment we are now witnessing in the American Muslim community,” said CAIR National Executive Director Nihad Awad.

WHAT: The Life and Contributions of Imam Siraj Wahhaj

Washington, D.C.–based CAIR and the American Muslim community are standing in solidarity with all those challenging anti-Black racism, xenophobia, Islamophobia, anti-Semitism, and white supremacy.