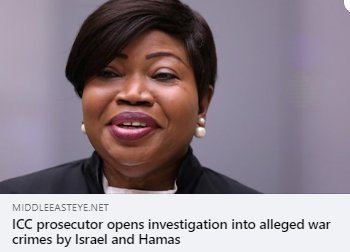 Following a five-year preliminary investigation, ICC Prosecutor Fatou Bensouda announced on Wednesday the court has jurisdiction in the occupied Palestinian territories and would formally open an investigation.

In a Department of State press statement issued yesterday, Secretary Blinken firmly opposed the decision and minimized the gravity of the charges against Israel by referring to it as the “Palestinian situation.”

In response to Blinken’s statement, AMP and CAIR issued the following statements:

“Palestinians are not a ‘situation,’ Secretary of State Blinken. Palestinians are a people who are deprived of their rights by Israel’s apartheid rule. As Palestinians are subjected to potential war crimes and crimes against humanity by Israel’s colonization of the West Bank, including East Jerusalem, and its repeated attacks against civilians in the Gaza Strip, the State of Palestine, a member of the ICC, is entitled to seek justice. The Biden administration’s shameful opposition to accountability for Israeli actions serves to perpetuate its crimes against the Palestinian people and makes a mockery of the State Department’s supposed commitment to center human rights in its policies,” said AMP Executive Director Osama Abuirshaid.

“Right now, the Biden administration is failing the test of ensuring U.S. impartiality in defending the human rights of the Palestinian people. CAIR condemns Secretary Blinken’s unwarranted opposition to the ICC’s Israeli war crimes investigation as it undermines President Joe Biden’s stated goal of reasserting U.S. moral authority in the region. Israeli war crimes are not a ‘Palestine situation,’ they constitute an Israeli government campaign of terror the occupied Palestinian people have suffered through for decades as our nation has turned a blind eye. Continued U.S. opposition to the ICC investigation would demonstrate the Biden Administration obstructing justice for Palestinians seeking to hold Israeli war criminals accountable as they live under perpetual Israeli apartheid,” said CAIR National Executive Director Nihad Awad.

AMP is a national education and grassroots-based organization, dedicated to educating the American public about Palestine and its rich cultural, historical and religious heritage. The organization was founded in 2006 and opened its national offices in Palos Hills, IL in 2009.