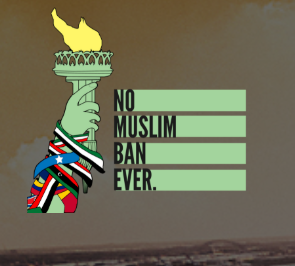 The first presidential debate will take place on Tuesday, September 29, from 9 to 10:30 p.m. (ET). It will be held at Case Western Reserve University in Cleveland, Ohio.

“We kindly request during tomorrow night’s presidential debate that you ask both candidates a question about the Muslim Ban. In January, our nation marked the 3rd anniversary of this executive order with a six-country expansion. Both candidates have a long public record debating the facts surrounding this ban and its future. The American Muslim community, like the rest of this nation, would like to know what future plans each candidate has for this discriminatory executive order.”

In July, CAIR applauded the U.S. House of Representatives for passing the NO BAN Act (H.R. 2486, formerly H.R. 2214) and urged U.S. Senate Republican leadership to support the bill.

The 90-minute debate will cover the following six topics: “The Trump and Biden Records,” “The Supreme Court,” “Covid-19,” “The Economy,” Race and Violence in our Cities,” and “The Integrity of the Election.”

The debate will be shown live on every major network, including ABC, CBS, Fox, NBC, CNN, Fox News, MSNBC and C-SPAN, and will be livestreamed on Youtube and CSPAN.

Last week, CAIR expanded its election website Muslims.Vote to include a new Early Voting Section, in addition to its national Vote-by-Mail Guide.