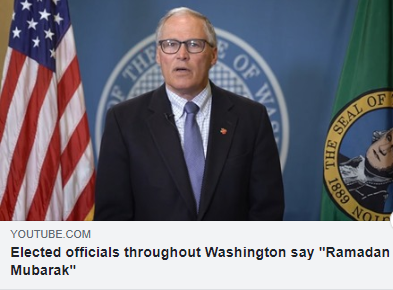 “This has meant a lot to all of us and is yet another example of how the Muslim community is a very bright spot in this blessed state of ours,” said Washington Governor Jay Inslee as he acknowledged the contributions of organizations like CAIR Washington, Muslim Association of Puget Sound (MAPS), MAPS-MCRC, Somali Health Board, and Muslim Housing Services.

The compilation video was produced by CAIR Washington in replacement of its regularly planned iftar dinners where local politicians meet and connect with the Muslim community. Featured in the video are:

“It’s been challenging this year for our community, having Ramadan fall during COVID-19,” said Masih Fouladi, Executive Director at CAIR Washington. “We wanted to find a creative way to bridge the gap between our community and elected officials this year, so that the community does not feel abandoned in its time of need. And it’s equally important that our lawmakers know about the work Muslim Washingtonians are doing to ensure we emerge from this pandemic more united in our work for justice.”

Video participants also made a point to highlight the crucial, ongoing civil rights and justice work being done by the Muslim community in Washington state:

“The Muslim Community as a whole are fighting for justice year-round, said Seattle Mayor Jenny Durkan. “That is exactly the spirit that makes Seattle so vibrant, welcoming and resilient.”

Fouladi emphasized the unique relationship the Muslim community has with its elected officials in Washington state:

“We’ve been so proud of the relationships we’ve been able to strengthen with law makers, especially over the last couple of years,” he said. “Whether it’s our Governor welcoming over 150 Muslims to the state Capitol for Muslim Day at the Capitol, Congresswoman Jayapal helping us secure the release of over 200 Iranians and Muslims detained at the border, or her and Representative Smith making the oppression of Muslims in Kashmir, India, and China a priority in the U.S. Congress, we’ve been honored to have such tireless advocates partner with our community.”