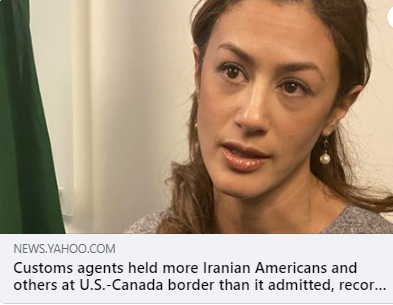 Yesterday, following a court order from the U.S. District Court for the Western District of Washington granting summary judgment to CAIR-Washington and the Northwest Immigrant Rights Project (NWIRP) are making public hundreds of pages of emails regarding the detention of Iranians at the Blaine, Wash., Port of Entry in early January 2020. NWIRP is representing CAIR-Washington in the case, which seeks the release of documents under the Freedom of Information Act (FOIA).

Chief Judge Ricardo Martinez of the U.S. District Court for the Western District of Washington granted CAIR Washington summary judgment, requiring Customs and Border Protection (CBP) to search the emails of high-level CBP officials for materials regarding an unlawful directive mandating the detention of Iranians, including lawful permanent residents and U.S. citizens of Iranian heritage, in early January 2020.

“We applaud Judge Martinez’s ruling on the matter,” said Imraan Siddiqi, CAIR-Washington executive director. “There is no basis for detaining individuals due to their national origin. Not only were the CBP’s actions illegal, but they explicitly colluded to cover it up and keep their actions from the American people. It is our duty as civil rights activists to ensure that CBP is held accountable for these flagrant violations to ensure our communities are protected.”

“The Constitution makes clear that discrimination based on national origin like this is unlawful. Yet, the records plainly demonstrate that CBP officials detained hundreds of people, including scores of U.S. citizens and lawful permanent residents solely because of where they were born.” Adams also made a call for transparency and accountability: “[T]he records make clear that authorities then lied about it. We urge Congress and the incoming Biden administration to hold CBP officials accountable for violating the civil rights of Iranian-Americans, among others.”

The newly-released emails unequivocally demonstrate that CBP detained United States citizens, lawful permanents residents, and others based solely on their national origin for many hours at the Blaine Port of Entry. Today’s publication also shows an attempt by high-level CBP officials to mislead the public.

Released emails demonstrate that after reporters began to inquire about the detention of Iranians at the Blaine Port of Entry, then-Acting CBP Commissioner Mark Morgan and other high-level officials signed off on a public statement claiming that “[r]eports that CBP officers are detaining Iranian-Americans and refusing their entry in the U.S. solely because of their country of origin are false.” The same statement that Mark Morgan authorized went on to claim that “[r]eports that DHS/CBP has issued a related directive are also false.” However, the released records make clear that the Seattle Field Office had issued precisely such a directive and detained hundreds of individuals based on national origin.

The Court also required CBP to provide to the Court unredacted copies of additional documents that CBP refused to release, in order to determine whether they must also be released to the public. Those documents include the previously-leaked directive ordering the detention of all Iranians entering at the border, regardless of their lawful status. In doing so, the Court observed that the “release of the directive that mandated the detention of individuals based on national origin may be appropriate” given that exemptions to FOIA “should not shield the disclosure [of] records of illegal activity.” Notably, as the Court observed in its decision, CBP has not contested that its actions in ordering the detention of Iranians at the border was unlawful.

Link to the Court’s decision

Link to the FOIA production