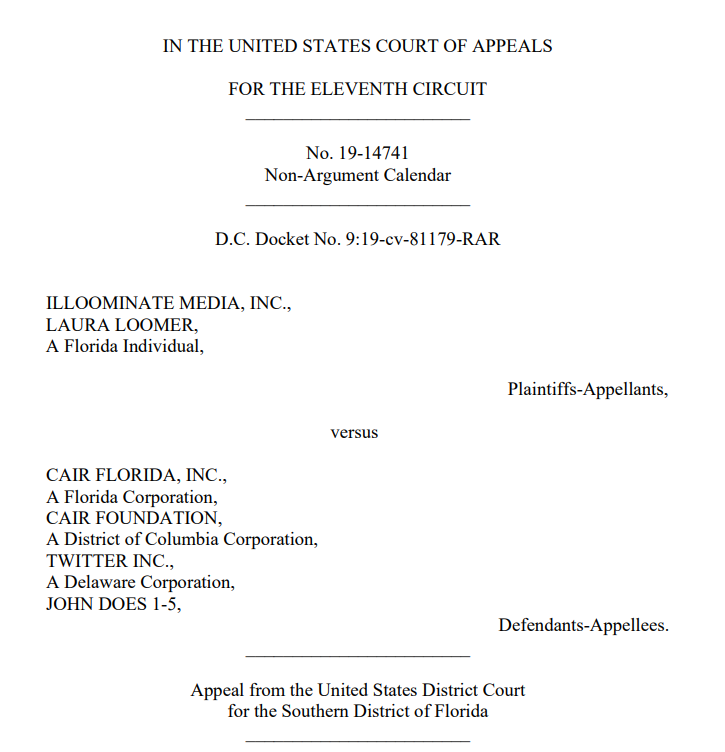 CAIR says it will now seek its legal costs from Loomer.

Last year, the district court dismissed both CAIR and CAIR-Florida from Loomer’s “nonsensical” lawsuit. Loomer had alleged—based on a prank that had long since been revealed not to be true—that CAIR had persuaded Twitter to ban the Islamophobic failed Congressional candidate from Twitter.

In a per curium opinion, the court wrote:

“[E]ven if [CAIR] instructed Twitter to ban her account, it did not tortiously interfere with a business relationship because Loomer did not have legal or contractual rights in the continued use of her account.”

The Court also affirmed the dismissal of CAIR-Florida, noting that Loomer and her company “already admitted that they do not know of any underlying facts that would make CAIR-Florida liable for Twitter’s ban of Loomer’s account.”

“Laura Loomer is an Islamophobe and the whole purpose of this lawsuit was to harass CAIR for having the audacity to protect the rights of Muslims. Her failure is a victory for Muslims, for civil rights and for the rule of law.”

“The Court confirmed what we already knew, that Loomer’s lawsuit was completely meritless. The case is over. All that is left now is for CAIR to recoup its legal fees as it is entitled to do under Florida law.”