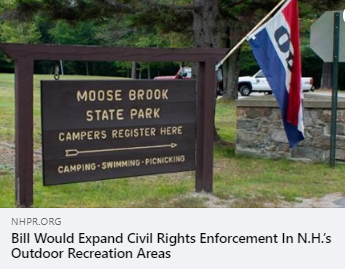 In New Orleans, La., the New Orleans City commission began the process to rename street and

city centers now named after Confederate soldiers. One of the high-profile landmarks, Lee Circle, named after the Confederate general Robert E. Lee, was on course to be titled Leah Chase, after the famous African American Chef hailing from New Orleans.

In Culpeper, Va., the Culpeper Town Council voted 5-4 to rename Lake Pelham, which honors a former Confederate officer. The new name has not yet been disclosed. The current vote faces much opposition as some call for a referendum.

In New Hampshire, a proposed bill in the New Hampshire Senate will require National Park conservation officers to be trained in civil rights enforcement and anti-discrimination and de-escalation methods. There have been several recent white supremist materials found in the parks, and members of the community report feeling unsafe, and some avoiding the parks altogether. This measure aims to improve the reporting of these incidents and to protect the community.

“We welcome all efforts to challenge the racism and white supremacy that we unfortunately see growing nationwide, and to build and celebrate a more inclusive and diverse society,” said CAIR National Communications Director Ibrahim Hooper.

Hooper said Washington-based CAIR and the American Muslim community are standing in solidarity with all those challenging anti-Black racism, xenophobia, Islamophobia, anti-Semitism, and white supremacy.