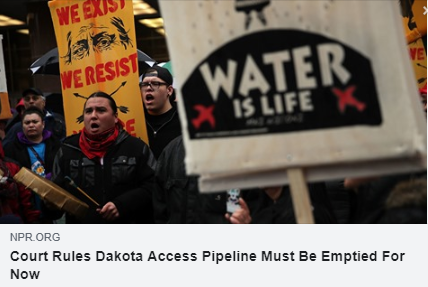 (WASHINGTON, D.C., 7/6/20) — The Council on American-Islamic Relations (CAIR), the nation’s largest Muslim civil rights and advocacy organization, today welcomed a decision by a federal judge who ruled that the Dakota Access Pipeline must shut down within 30 days while the U.S. Army Corps of Engineers conducts a full environmental impact analysis.

Members of the Standing Rock Sioux tribe and their supporters have protested the project as a violation of their sacred land and of the environment and sued in 2016 to halt the project for failing to consult with the tribe and protect historic and sacred sites as mandated by the to the National Historic Preservation Act.

U.S. District Court for the District of Columbia Judge James Boasberg today vacated what he dubbed was the Corps’ “highly controversial” choice to grant federal approval for the pipeline project ruling that “the seriousness of the Corps’ deficiencies outweighs the negative effects of halting the oil flow” until the Corps completes its environmental impact assessment.

“We welcome Judge Boasberg’s ruling to shut down — at least for the time being — the Dakota Access Pipeline that runs adjacent to Lake Oahela and lands sacred to the Standing Rock Sioux tribe,” said CAIR Director of Government Affairs Department Robert S. McCaw. “This ruling represents a measure of justice for the Standing Rock Sioux tribe and a return to due process in projecting and preserving the environment. American Muslims will continue to stand in solidarity with Native Americans by respecting their culture, heritage and lands.”

In 2016, CAIR called on the Department of Justice Civil Rights Division to investigate documented reports of excessive use of force by law enforcement and private Dakota Access company security guards against peaceful protestors, journalists, and others at the protest of the controversial Dakota Access Pipeline project.

At the peak of anti-pipeline protests CAIR Minnesota and other CAIR chapters joined activists at Standing Rock to protest the pipeline.