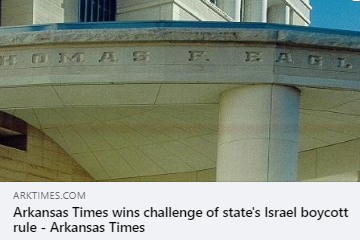 (WASHINGTON, D.C. – 2/12/2021) — The Council on American-Islamic Relations (CAIR), the nation’s largest Muslim civil rights and organization, today welcomed a federal appeals court decision that declared Arkansas’ anti-BDS law, which requires Americans to sign an oath pledging not to boycott the Israeli government as a condition for working with the state, is unconstitutional.

The ruling by the U.S. Court of Appeals for the Eighth Circuit overturns a district court that upheld the anti-boycott law. The free speech lawsuit filed against the state of Arkansas was filed by the ACLU on behalf of The Arkansas Times, which lost its advertising relationship with the state when the newspaper refused to sign a state-mandated oath pledging not to boycott Israel. CAIR filed an amicus brief in the Arkansas case alongside numerous other civil rights groups.

“Today’s federal ruling represents a critically important moment in the struggle to protect free speech here at home and advance human rights overseas. From Arizona, to Texas, to Arkansas, numerous courts now recognize the obvious: states cannot require individuals or corporations to sign an oath pledging support for the Israeli government as a condition for working with a state government.”

CAIR also today called for the State of Georgia and other states with similar anti-boycott provisions to stop enforcing the unconstitutional laws and stop defending them in court.

Last year, CAIR National and CAIR-Georgia filed a federal free speech lawsuit against the University System of Georgia after a state university cancelled a journalist’s speaking engagement when she refused to sign a state oath pledging not to boycott Israel. In 2019, CAIR won a landmark legal victory against a similar law in Texas.

The American Civil Liberties Union, and other civil rights organizations have filed free speech lawsuits against anti-BDS laws in Arizona, Maryland, and Texas. So far, courts have blocked anti-boycott laws in Kansas, Arizona, and Texas.

In Texas, the federal court held that that the state’s anti-boycott law “threatens to suppress unpopular ideas” and “manipulate the public debate” on Israel and Palestine “through coercion rather than persuasion.” The Court concluded: “This the First Amendment does not allow.”