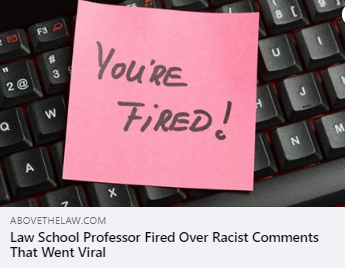 Sellers was caught on video with Professor David Batson discussing a Black student’s performance, in which she said: “I end up having this angst every semester that a lot of my lower ones are Blacks. Happens almost every semester. And it’s like, oh come on. It’s some really good ones, but there are also usually some that are just plain at the bottom, it drives me crazy.”

In an email sent to the Georgetown Law community, Dean William Treanor noted:

“I informed Professor Sellers that I was terminating her relationship with Georgetown Law effective immediately. During our conversation, she told me that she intended to resign. As a result of my decision, Professor Sellers is no longer affiliated with Georgetown Law. Professor Batson has been placed on administrative leave pending the investigation by the Office of Diversity, Equity and Affirmative Action, the results of which will inform our next steps. Until the competition of the investigation, Professor Batson will have no further involvement with the course in which the incidents arose.”

“We welcome Georgetown Law’s immediate firing of Professor Sellers. Her comments are racist and unacceptable, particularly at an institution that seeks to instill a sense of justice in its students,” said CAIR Research and Advocacy Coordinator Huzaifa Shahbaz. “We stand in solidarity with the Black Student Association at Georgetown Law and urge the Law Center to take the necessary steps to meet their demands.”

“As an African-American Muslim, a civil rights attorney, and a graduate of the Law Center, I am pleased to see that the law school took swift action to address this conduct. I expected nothing less from Dean Treanor and Georgetown Law, which greatly benefits from its diversity. All law schools should use this incident as an opportunity to advance diversity in both their faculties and student bodies while confronting racial bias.”

After the discovery of Sellers comments, the executive board of the Georgetown Black Law Students Association wrote a statement to the Georgetown Law Administration demanding the termination of Professor Sellers and a public apology from Professor David Batson in his failure to adequately condemn Sellers’ statements.

The statement was supported by 72 Black Student Associations chapters, over 700 Georgetown students, and more than 600 public signatures.