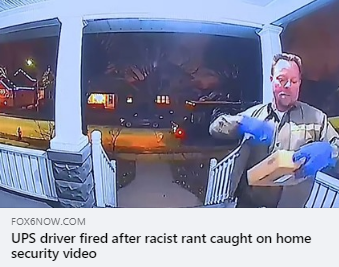 (WASHINGTON, D.C., 1/6/2021) – The Council on American-Islamic Relations (CAIR), the nation’s largest Muslim civil liberties and advocacy organization, today welcomed the firing of a UPS driver caught on video in a racist rant while delivering packages to a Hispanic police officer’s home in Milwaukee, Wis.

The incident was captured by a home surveillance system and showed the UPS driver yelling expletives and writing a false failed delivery note, without actually attempting to deliver the package.

A Latino civic advocacy group, Forward Latino, believes the rant was prompted by the driver reading the name of the receiver, who had a Hispanic-sounding name. A UPS spokesperson said the company has fired the employee.

“We welcome the decision to fire this individual and view it as a clear indication that UPS – or any other corporation – will not tolerate bias or discrimination on the part of its employees,” said CAIR National Communications Director Ibrahim Hooper.