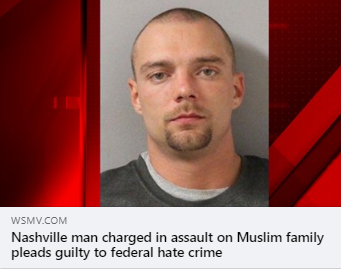 (WASHINGTON, D.C., 5/18/2021) – The Council on American-Islamic Relations (CAIR), the nation’s largest Muslim civil rights and advocacy organization, today welcomed a guilty plea by a Tennessee man charged with a bias-motivated attack on a Muslim family in 2017.

Christopher Beckham pleaded guilty to a federal hate crime charge this week. He was indicted after stalking two Muslim girls wearing Islamic head scarves (hijab) and attacking them and their family with a pocketknife. Beckham admitted in court to carrying out the attack because of their perceived religious affiliation and ethnicity. He pleaded guilty to violating the Matthew Shepard and James Byrd, Jr. Hate Crimes Prevention Act.

“We welcome this guilty plea as an indication that our system of justice can work for those who are targeted by hatred and bigotry, even if it takes years,” said CAIR National Communications Director Ibrahim Hooper. “We thank all those law enforcement authorities who worked to bring the perpetrator to justice.”

He noted that CAIR recently released its latest report on the civil rights of American Muslims, titled “Resilience in the Face of Hate,” detailing more than 6,000 civil rights complaints the Washington, D.C., based group received in the past year.