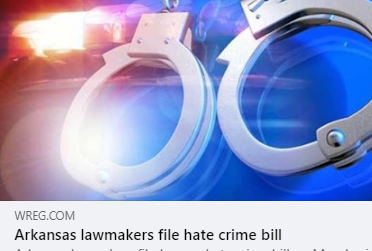 On Monday, state lawmakers in Little Rock filed legislation combating hate crimes, the latest in a series of attempts. The bill is designed to strengthen penalties for discrimination based on sex, national origin, religion, and a number of other factors.

Penalties under this new bill could increase sentences by up to 20 percent. Arkansas currently has legislation increasing sentences for hate crimes by law enforcement and first responders. However, it is among the few states (Arkansas, South Carolina, Wyoming) without existing anti-hate crime legislation. Previous attempts have been made in the state legislature and have yet to succeed.

The latest hate crime bill will be introduced when the legislature comes back into session, in mid-January 2021.