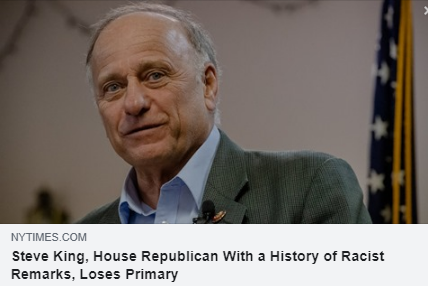 In a statement by CAIR Director of Government Affairs Robert S. McCaw:

“CAIR and anti-racism activists nationwide welcome Iowa voters’ rejection of white supremacist and anti-Muslim bigot Steve King, who for years has used his role as a member of Congress to promote his toxic brand of bigotry and divide our national along racial and religious lines.

“As the nation protests anti-black racism on the streets, it is encouraging to see mainstream Americans when given a choice will reject a racist candidate like King.

On May 15th, CAIR urged Congress to reject King’spush for committee reassignment after last year being removed for defending white supremacy in an interview with the New York Times and following years of racist and bigoted comments.

In 2018, CAIR joined 139 other organizations in calling on then House Speaker Paul Ryan and Majority Leader Kevin McCarthy to censure King after he was caught calling Mexican immigrants “dirt” in a taped conversation with supporters.

CAIR has documented numerous other incidents of King engaging in anti-Muslim, anti-immigrant, and White supremacist rhetoric.

Last year, CAIR condemned Rep. King for joking about reports that Uyghur Muslims in Chinese concentration camps are being sterilized and force-fed pork in violation of their religious beliefs.

In 2017, CAIR called out Rep. King for tweeting in support of the Islamophobic extreme-right Dutch politician Geert Wilders, who has referred to people of Moroccan heritage in that nation as “scum,” King tweeted: “Wilders understands that culture and demographics are our destiny. We can’t restore our civilization with somebody else’s babies.”

That year, CAIR also condemned as un-American a tweet by Rep. King for stating that “diversity is not our strength” as a nation. King tweeted that claim along with a quote from Islamophobic Hungarian Prime Minister Viktor Orban, who said, “Mixing cultures will not lead to a higher quality of life but a lower one.”

In 2015, CAIR condemned King’s bizarre claim that refugees who “do hajj to Mecca” cannot assimilate into other cultures like their Christian counterparts. The anti-Muslim remarks were made at a rally for GOP presidential candidate Sen. Ted Cruz (R-TX).

The Washington-based Muslim civil rights organization has reported an unprecedented spike in hate incidents targeting American Muslims and members of other minority groups since the election of Donald Trump as president.