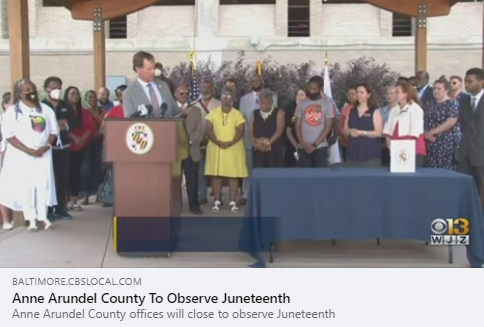 (BALTIMORE, Md., 6/3/21) – The Maryland office of the Council on American-Islamic Relations (CAIR) today welcomed news that Anne Arundel County has officially recognized Juneteenth as a county holiday for the first time.

Juneteenth – also known as Freedom Day, Jubilee Day, Liberation Day, and Emancipation Day – is observed on June 19th annually. It marks the emancipation of those who had been enslaved in the United States, more than two years after the Emancipation Proclamation outlawed slavery. Originating in Galveston, Texas, it is now commemorated annually throughout the United States with increasing official recognition. While it is ceremonial rather than a national holiday, more localities are moving to add it to their calendar of official holidays.

Anne Arundel County Executive Steuart Pittman announced the executive order making Juneteenth a county holiday in 2021 at a signing ceremony yesterday, with a pledge to push to make it a permanent annual holiday. Anne Arundel County offices will be closed on Friday, June 18 in observance of the holiday, while a parade is being planned for Saturday, June 19.

The order reads in part:

“Juneteenth celebrates an opportunity for all residents of Anne Arundel County to mark a holiday of education, reflection and celebration, to educate ourselves on the history of our county, to celebrate the end of enslavement and to redouble our efforts to rid our society of its shameful legacy of racism, discrimination and inequity.”

“We don’t have a holiday to celebrate freedom, liberty and justice for all. The things that we say when we pledge allegiance to the flag. Things that we’re still working on in this country and in this county,” said County Executive Pittman in a statement. “Juneteenth is a moment in history that, probably more than any other day in the history of this country in my view, was a large step forward.”

“This historic designation is long overdue,” said CAIR’s Maryland Director Zainab Chaudry. “Slavery was one of the most painful, shameful and despicable chapters in our nation’s history. Too many people are still unaware of Juneteenth. An official holiday will help educate our diverse communities and encourage us all to remember, honor and reflect on the perseverance and moral courage of those who brought an end to it.”